Sheryl Sandberg is on the shortlist to become the next CEO of Disney. Here’s everything you need to know about this notable author and businesswomen.

The word you need to ban from your vocabulary to get ahead at work: http://t.co/ZhSzIvBbAx pic.twitter.com/71KmEkCMkx

The New York Post reports that Sheryl Sandberg is one of the most likely candidates to replace CEO Bob Iger. In two years, Iger plans to retire.

It had been thought that Disney TV boss Anne Sweeney was in line for the CEO gig, but she recently announced she was leaving the company.

Sandberg currently serves as Facebook’s COO, but not all sources think Sandberg will get the job. Business Insider writes that reports of Sandberg’s imminent ascension to the Disney throne are incorrect.

Sandberg is in the headlines for another reason this week, besides her possible CEO gig at Disney. Sandberg, along with Beyonce, recently launched a campaign to “ban” the word “bossy” when talking about girls and women.

Mashable notes that Sandberg is also partnering with the Girl Scouts as part of the bossy ban. You can watch the “bossy” video above.

3. Sheryl Sandberg Is the Author of ‘Lean In’

Sandberg is the author of the bestselling book “Lean In: Women, Work, and the Will to Lead.” The Washington Post says the book has sold 1.6 million copies to date. “Lean In” explores why women’s voices are not always heard in the workplace.

Prior to working for Facebook, Sandberg served as Chief of Staff to the Secretary of the Treasury. After her stint at the Treasury, she worked for Google. At Google, she was the Vice President of Global Online Sales & Operations.

5. Sheryl Sandberg is a Harvard Alum

Sheryl Sandberg graduated from Harvard in 1991 with a degree in economics. She later got her MBA from Harvard as well.

Other notable Harvard alums who work (or have worked) at Facebook include Mark Zuckerberg, Eduardo Luiz Saverin, and Dustin Moskovitz. 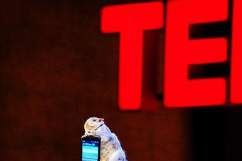