Want to play some cool new games, or learn about some hidden gems? These are the best Android games you should be playing this May.

Check out a review of this game in the video above.

The Amazing Spider-Man 2 is the tie-in game for the upcoming movie of the same name. In this game, you can help Spidey take down bad guys, swing around NYC, or take on six iconic Marvel villains. If you want to get pumped for the new Spiderman movie, this game is a great buy.

Retro Rogue is a dungeon crawler. Boasting charming retro-style graphics and tons of monsters to take down, this will appeal fans of retro games, pixel art, and dungeon-style games.

Get more info about Baldur’s Gate in the video above.

Baldur’s Gate Enhanced Edition was updated at the end of April, making the playing experience even more enjoyable for players who start the game in May. Originally released in 1998, this mobile version of the game is ideal for players who want to relive the story for a second time. However, it will also appeal to new players as well.

4. Family Guy: The Quest for Stuff

Check out The Quest for Stuff launch trailer above.

Family Guy: The Quest for Stuff is a free game that lets you play with all of your favorite characters from the TV show. After Peter and the Giant Chicken get into another epic fight, Quahog is destroyed. Your job is to save the city and send your characters on hilarious quests.

Pocket Knights is a free-to-play fantasy card battle RPG. If you love card games or games with beautiful art, this is a must-try. It has a user base of about 4 million players. 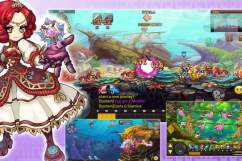