Apple has released information about the newest version of OS X. Called Yosemite this OS was unveiled at Apple WWDC 2014. Here’s a rundown of the five coolest features in this new OS.

Apple's spending way too much time on the translucent bit.It's a nice, polished tweak that users will ignore after the first few mins. #WWDC

Apple wanted to focus Yosemite on three main focus areas: interface, apps, and continuity. A big part of that interface is translucent menus. Refinements in the translucency of menu items let you see a ghostly image of your desktop background through the sidebars of a menu. This translucency also gives you a better sense of depth when working with multiple windows that are layered over one another.

Translucency does seem to be a bit controversial, with some people on social media loving it, but others being quite outspoken against it. Your personal preference may go a long way towards setting your feelings about this cosmetic change to OS X.

Continuity is a big buzzword for OS X Yosemite. AirDrop now works between iOS and Mac products, which is very convenient. A new offering, Handoff, lets your devices communicate with each other to help you work on the same project across multiple Apple devices.

You can start composing an email on your phone, walk over to your computer, and the computer will prompt you to finish the email on your Mac.

OS X Yosemite has some big shoes to fill. 40 million copies of Mavericks, Apple’s last OS, have been installed since last fall. This is the fastest adoption ever of any computer operating system in history, according to Tim Cook at WWDC.

Designed to improve both clarity and utility, OS X Yosemite features cosmetic changes to the dock, as well as new icons (the icon for the trash can got a big laugh at WWDC). Notification center’s “Today View” melds with your apps and widgets seamlessly. The OS has maxmized space for content, especially when it comes to the sidebar design for message apps like FaceTime and Reminders.

Spotlight now appears in center of screen. Simply type in a few characters to find news, Wikipedia info, maps, and docs from your computer. Search by app to find items, find movie times near you, or see media you can buy from Apple that’s related to that topic.

4. OS X Yosemite Lets You Draw On Photos and Documents

#Yosemite #OS Those email features are sick! Now you can draw on your images using your trackpad and send up to 5GB attachments. #WWDC

Mail has new Markup feature. This may make Mail a lot more compelling for people who use web-based clients instead. Markup will let you draw or write on top of photos or documents. This allows you to mark up PDFs with notes, sign documents without printing, or just doodle something funny on a corner of a photo.

Moreover, Markup is “smart” enough to identify some drawings. Say you draw an arrow or a “word bubble” for text. Markup will take your awkward drawing and polish it up a bit, making your notes look really professional and clean.

iCloud Drive lets you access docs in the cloud, and they can be synced across all your Mac products. This might be enough to get some people to ditch other Cloud services like Dropbox or Box.

Additionally, your Mac now acts as a caller ID for when you get a call on your iPhone. You can use your Mac as a speaker phone, or call a number you see on webpage right from your Mac. The call feature in OS X Yosemite was demonstrated during the Keynote with none other than Dr. Dre.

Want to get your hands on Yosemite? Apple will open up a public beta this summer, with the final product launching this fall. 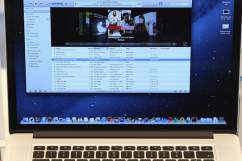