A shopper ltries out the new Apple iPhone 6 at the Apple Store on the first day of sales of the new phone in Germany on September 19, 2014 in Berlin, Germany. (Sean Gallup/Getty Images)

The newest mobile operating software for the Apple iPhone is due to be released today, September 13. The update brings a bunch of new features. But what time will it be released?

Apple’s updates usually drop around 1 PM EDT globally. For other Americans, this means that it can be expected in Central Time at noon, Mountain Time at 11 AM, and Pacific Time at 10 AM.

iOS 10 was revealed first revealed by Apple in June. It was then featured at their annual keynote address on September 7, 2016. The update isn’t just for iPhones, but for Apple tablets, also. New features in the update include a facial recognition search for private photos in albums, a customizable lock screen for weather widgets and more, easier emoji search, and a slew of others. 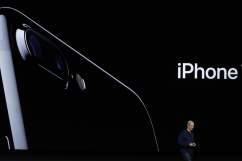 How Can You Still Get an iPhone 7 on September 16?