This launcher also has an “at a glance” section at the top of the screen that shows the date, time and your calendar notifications. You can adjust what’s being seen there by holding it down and selecting “preferences.” Your Google clock icon will also update automatically to the correct time to the minute.

The Google Pixel 2 and 2 XL won’t be available until Thursday, and that’s only if you pre-ordered it right away. Most of the phones are now shipping a week or two later than the original release date.

The good news is that you can download the new launcher on your Android phone right now. It’s compatible with devices as far back as Android 5.0. The launcher is available in beta right now. To get it, you have to be using Nova Launcher in lieu of any other Android launcher.

Here’s how to get the launcher:

If you don’t want to test the new launcher in Beta, you’ll have to wait for your Google Pixel 2 or 2 XL to arrive. To check the current ship dates for newly pre-ordered phones, check our chart here. If you want to receive a phone on launch date but have yet to pre-order it, the best bet will be to visit a store on October 19, launch date. It’s also likely that the phones will be restocked before the end of the holiday season. 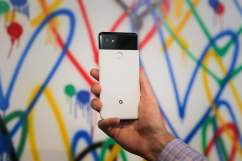