This computer has a lot going for it and at a very reasonable price. It boasts an i7-8700 six core processor, 16GB of DDR4 RAM, a 256GB SSD and two terabytes of storage. It boasts an attractive black exterior, DVD burner, and for the gamers out there, a fast GTX1050Ti. This card is suitable for playing modern games at low to medium settings. Personally, I am a Dell fan. I have owned a few Dell computers, most recently the XPS 8920, this PC’s predecessor, and it has never caused me any trouble. They’re known for high quality customer service and reliable PCs. In terms of the specs, this PC works for anyone who needs to do pretty much anything. It is a beast for photo editing, video editing, and video gamers.

With this much power under the hood, the only person who would need a more powerful PC is a hardcore gamer who wants a better graphics cards. Even for 4K editing, however, this PC should prove more than powerful enough. It’s the Editor’s Choice because there’s just no need for the vast majority of users to spend more.

Speaking of gamers, this Gamer Xtreme VR boasts largely the same features of the Dell with some light soup-ing up. It boasts an i7-8700K, which is about 7% faster than the i7-8700. The more substantial difference here, however, is that this PC has a GTX 1070 which means it’s fully capable of playing modern games at high to ultra settings. CyberPowerPC is a popular brand and like most manufacturers includes a one year limited warranty on labor and parts. They also, however, offer free lifetime tech support.The GTX 1070 will also have some additional benefits if you are outputting to multiple displays, editing video using programs like Premiere Pro and After Effects, and of course, if you’re mining cryptocurrency. That said, for most users, the difference between a GTX 1050TI (above) and this graphics card won’t have a dramatic effect on your experience using a coffee lake desktop.

There’s not an abundance of high quality 8th generation Intel processor desktops on the market so forgive me for my inclusion of this very similar model. At the same time, this model does offer a few key differences and it does serve a slightly different use case. It changes two things: the RAM goes from 16GB to 24GB. This will impact performance if you are one to have lots of applications open all at once. Another nice perk here is that the SSD is double in size (512GB). It would be worth upgrading to this higher end model if you’re going to be using a lot of the same files on your internal SSD a lot, one use case that comes to mind would be someone that produces music or video using a library of samples or clips. In general, having these upgrades leads to marginally better performance all around. For most, it just won’t be worth it. That said, if you want a bit of extra perfomance, this is the same great machine at a slightly higher price and invariably, one will want a bigger SSD (it just may not be something you really need).

I would describe this PC as “top of the remotely practical line.” It’s far beyond what almost any average person would need, but still within the realm of PC mortals. It boasts the i7-8700K processor, but that’s about the most modest thing about it. It has 32GB of RAM which is more than most people will ever use. It also has a 512GB SSD plus a two terabyte data drive, which is a solid amount of storage (identical to the model above). The real star of the show, however, is it graphics card. It has the GTX 1080 Ti which is considered the best graphics card currently on the market. Of course, one could always get a dual graphics card system, but like I said, this is about as high as one can practically go without introducing ridiculous specs. Needless to say, this PC is really only for gamers, but it won’t let you down if that’s what you’re after – or if you’re going for anything else. Having a graphics card like this can also benefit render times in photo or video editing (not Photoshop however; it only uses the processor), and in general make things smoother if you’re outputting to many displays, for instance.

This MSI Vortex is an extremely attractive computer and includes a backpack, but with specs like these, it’s really only for VR gamers. For one, it’s just as expensive as the Omen above, yet has a significantly less powerful graphics card, the GTX 1060 (6GB). The perks of this PC are largely in its storage; it has a one terabyte SSD and 64GB of RAM. The former is obviously very practical for video editing or storing lots of fast-loading games. That said, I’m going to admit I had no idea what anyone would do with 64GB of RAM. As it turns out, there is a good use for gaming with this much RAM: it lets you see much more of the world in say a massively multiple online game without any pesky loading. If you’re into these sorts of massive world games or games with extremely detailed environments (VR), this rig may offer some advantages over the Omen. That said, be sure to check if the games you have in mind specifically suggest this kind of RAM; in general, a GTX 1080Ti will offer much more benefit in a coffee lake desktop with a lot of overall power.

If you’re still curious why someone would need this much RAM, be sure to check out this thread on Quora, “What would you need 64GB of RAM for?” As it turns out, there are quite a few things including virtual machines, research, and pro CGI software. For most, however, 64GB of RAM is just a ridiculous spec, like a car that goes 180MPH, it will just leave you asking, “But when can we go that fast?” 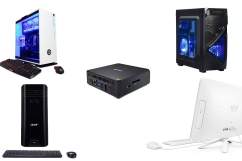