No, that stare isn’t ominous at all.

Despite that the couple has yet to publicly reaffirm their relationship, not to mention Chris Brown’s on-again off-again fling with Karrueche Tran, EntertainmentWise is reporting the two are set for a private rendevous in Barbados. Allegedly Chris’ mother has booked a luxury villa for the couple and several other family members to spend time together over the holiday on the island. 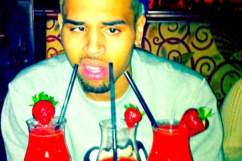 For all those worried about that one time Chris Brown beat the crap out of her three years ago, we say not to worry. Ike and Tina made it 16 years, we’re rooting for you kids.

Recently, Rihanna’s father publicly said that he would love it if Chris Brown would marry his daughter. While rumors have been flying around concerning the couples supposed reconciliation this past October, this rumor appears to have gathered the most steam. How would you feel about the two love birds tying the know?