J-Lo, famous for leaving little to the imagination, showed up at the Grammys tonight in a black Anthony Vaccarello dress with a slit up to her elbow.

But she showed no hint of cleavage, apparently adhering to a CBS memo barring the baring of breasts, genitals or buttocks at the awards show. 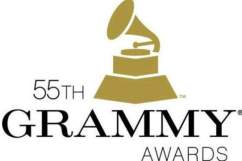 As she took the stage with Pitbull to announce the winner for Best Pop Solo Performance (Adele), she quipped, “As you can see I read the memo.”

Pitbull replied, “You inspired the memo.”