Shia LaBeouf was due to star in Orphans but now has dropped out after finding himself in a “disagreeable situation” with co-star Alec Baldwin.

This would have been LaBeouf’s Broadway debut. After the announcement the Indiana Jones star took to Twitter to show his fans what exactly went on between him and his co-star and the play’s writer and director, Lyle Kessler.

He leaked several emails of his back-and-forth with Kessler, his co-star Tom Sturridge, and other members of the production.

LaBeouf also leaked his audition video for the play.

The play, which is about two brothers who hatch a plan to kidnap a wealthy gangster, would have LaBeouf play Treat,the older of the brothers and Baldwin as Harold, the gangster. 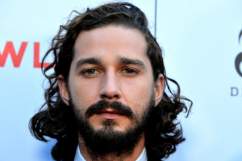 Here’s three of the emails that LeBeouf leaked on his Twitter page:

In another email to his former co-star Alec Baldwin, Shia seems to ramble in saying:

My dad was a drug dealer. He was a s–t human. But he was a man. He taught me how to be a man. What I know of men, Alec is. A man is good at his job. Not his work, not his avocation, not his hobby. Not his career.

His job. A man can look you up and down and figure some things out. Before you say a word, he makes you. From your suitcase, from your watch, from your posture. A man infers. A man owns up.

That’s why Mark McGwire is not a man. A man grasps his mistakes. He lays claim to who he is, and what he was, whether he likes them or not. Some mistakes, though, he lets pass if no one notices. Like dropping the steak in the dirt.

He does not rely on rationalizations or explanations. He doesn’t winnow, winnow, winnow until truths can be humbly categorized, or intellectualized, until behavior can be written off with an explanation. A man knows his tools and how to use them –- just the ones he needs.

Knows which saw is for what, how to find the stud. A man does not know everything. He doesn’t try. He likes what other men know. A man can tell you he was wrong. That he did wrong. That he planned to. He can tell you when he is lost. He can apologize, even if sometimes it’s just to put an end to the bickering. Alec, I’m sorry for my part of a disagreeable situation.

To which Baldwin replies:

The week goes from bad to worse for Baldwin: