It looks like Seth Meyers might take over Jimmy Fallon’s spot on Late Night. If he does, he’ll be carrying on the tradition of men hosting late night shows. Meyers is a fine choice, and he deserves it, but Joan Rivers is the only woman to host a late night show on a broadcast network, and that was in 1986. So while Jimmy Fallon is leaving behind a hole in the NBC line-up, let’s imagine which funny women could take his place.

Tina Fey is probably the obvious choice. She’s a darling of Lorne Michaels’ and has the Saturday Night Live cred that has been the pattern for Late Night hosts. Fey has the level-headed intelligence that works well for a talk show, and as her show 30 Rock proved, she’s not afraid to get silly. She’s unlikely to take the job, though, since she is “too busy.” 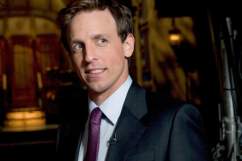 Jessi Klein has been referred to as the next Tina Fey, most of that is probably due to the fact that they both rock the brunette bespectacled look. Like Fey, Klein is an SNL alum, having worked as a writer for the show. She’s worked on the executive side of television, as well, for Comedy Central. Since she’s almost a Tina Fey with stand-up experience, transitioning into a late night show could be fairly smooth.

Chelsea Peretti would be a break from the SNL streak, but that doesn’t make her any less qualified. She has extensive writing experience for shows like The Sarah Silverman Program, Kroll Show, and Parks and Recreation and is a founder of the New York City Rejection Line. “All My Exes,” her web series, garnered her a cult following early in her career. She now has her own podcast, Call Chelsea Peretti, but she’s a favorite guest on many others, including You Made It Weird with Pete Holmes and Doug Loves Movies. She’d have a David Letterman sort of vibe, not letting her guests get away with anything.

Think one of these women should host Late Night? Share!

Amy Schumer first got national recognition for her comedy after reaching the finals of the NBC reality show Last Comic Standing in 2007. As of late, she’s become known for her appearances on the Comedy Central Roasts of Charlie Sheen and Roseanne Barr. Hers would be a fresh vibe to the network late night scene, with her high-pitched voice alone a stark contrast to, say, Craig Ferguson’s. Though, she’s probably a bit busy, considering her Comedy Central sketch show, Inside Amy Schumer, is set to premiere in April.

This one is a long shot, but a girl can dream. Kelly Oxford has been on a rocket to Hollywood fame, selling a pilot and a screenplay and getting a book deal, all because of her blogging. Though she’s been blogging since the dawn of the internet, she got most of her fame from her Twitter account, where she began to attract celebrity fans like Jessica Alba and Jimmy Kimmel who helped her get to the 455,000+ followers she has now. Though she’s not totally comfortable in front of a camera, as she demonstrates in the teaser for her new book, she definitely has the wit and charm to carry a show. She may not like the camera so much, but the camera likes her.

Think one of these women should host Late Night? Share!