Lindsay Lohan has been back in the media spotlight since getting sentenced to 90 days in rehab for lying to a police officer after a car crash last year, but now everyone is talking about the new man in her life. The troubled star has been rumored to be dating Avi Snow. Here’s everything you need to know about LiLo’s new beau.

1. Lindsay Lohan and Avi Snow Have Been Together for a Few Weeks
According to E! News, LiLo and her new love interest Avi Snow have been dating for a few weeks now with their relationship in its “early stages.”


Avi Snow (far right) with The City of the Sun band members.

Avi Snow is a member of the band City of the Sun. He plays guitar for the indie group and his posts on Twitter are usually music-related. The band, which seems to be up and coming, has just under 3,000 likes on its Facebook page.

3. And a Club Promoter
Snow’s main gig is as a club promoter in New York City.

4. He’s Not a Party Animal Like Lindsay
I know what you’re thinking: Should LiLo really be dating a band member and club promoter right now so she can get out of the club scene? Well, apparently Snow isn’t that much of a party animal.

“Avi’s not a feckless party animal, he works in that industry, sure, but he’s got a good head on his shoulders,” a source told the Daily Mail. “He’s from a solid background and doesn’t get involved with the drugs scene, he doesn’t even drink much… basically, he knows who he is and likes control, he could help Lindsay.”

5. A Source Insists They are Just Friends
However, another source says the two are just friends.

6. He Was On Her Private Jet That Took Her to Court
You can deny the rumors all you want, but the pair sure doesn’t seem like they are “just friends.” Avi was aboard Lindsay’s “Mr. Pink” private jet that flew her to L.A. early Monday morning. That’s a pretty big move for just a friend.

7. Lohan Went His Private Show After Taking Her Latest Mug Shot
The Liz & Dick star apparently booked it for Snow’s City of the Sun show at 41 Ocean, a private club in Santa Monica, California directly after posing for her latest mug shot on Monday.

8. Lohan Was Sentenced to Spend 90 Days in a Locked Rehab Facility
Lohan arrived late to court on Monday where she received five days in jail, 90 days locked in rehab, 30 days of community service and 18 months psychotherapy, as well as several fines. At least she will have someone to text while at the rehab facility–that’s if Snow has the patience to wait the 90 days until she gets out.

9. Her Most Recent Romantic Ties Have Been With Julian Cavin and Max George

Besides Snow, Lindsay has been romantically involved with New York DJ Julian Cavin and The Wanted singer Max George. George admitted to having a relationship with Lindsay, but said the two weren’t serious. Cavin also said that they were just friends. Will Avi Snow be the man to tie the troubled star down?

10. Snow’s Relationship With Lindsay Could Skyrocket His Band
Snow’s band City of the Sun is just an indie band as of yet, but his new relationship with the celebrity is sure to bring some attention. The relationship could even skyrocket the band to the mainstream spotlight. Let’s just hope that’s not Snow’s only intentions. 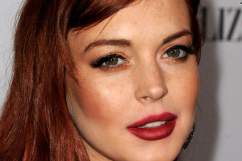 Lindsay Lohan Gets Locked in Rehab After Glitter Attack

Read More
Celebrities, Lindsay Lohan, Top 10
Lindsay Lohan's got a new boy toy and he just might not be the worst thing for the troubled star.