Dancing With the Stars saw a shocking drop out on Tuesday night as Olympic gold-medalist Dorothy Hamill announced that she is leaving the competition, reports E! News.

Hamill told the judges that she was forced to leave the show on advice from her spinal surgeon because of an irreparable injury.

“I have an injury that could be irreparable, and nerve damage, and it would be completely unfair for me to stay in this and have any of these people go home,” the 56-year-old figure skater said. “I can’t do what I need to and, you know, the rest of life is physical, as an athlete, is important.”

She also acknowledged her dance partner, Tristan MacManus, adding that she “can’t do him justice.”

Her departure from the DWTS meant that no one was eliminated from the show Tuesday night, giving those in the bottom another chance to return to the competition next week. Victor Ortiz and Lindsay Arnold were the first couple in jeopardy, followed by couples Lisa Vanderpump and Gleb Savchenko and Andy Dick and Sharna Burgess. 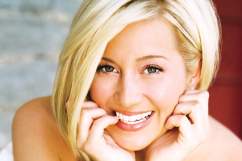