The winter storm has passed, and so has the love between Seth MacFarlane and Game of Thrones star Emilia Clarke.

After over six months of dating, the lovebirds have called it quits, according to E! Online. Here’s what you should know about their relationship and breakup.

1. Distance Was the Main Factor


A source told E! News that the couple’s lack of spending time together was due to their work locations on opposite sides of the globe. “They are no longer dating,” a source told the site. “It was really a location challenge. She has been in Europe shooting Game of Thrones and he is based in California, so it was hard to make it work despite the distance.”

2. The Two First Met at an HBO Afterparty


The couple had some good times, starting with the day they first met, which was last September. The 39-year-old Family Guy creator and the 25-year-old actress met at an HBO Emmy afterparty at the Pacific Design Center in West Hollywood. The two were spotted cozying up to each other having a few drinks and having some fun. The couple also came together at the Golden Globes afterparty last January, according to Deadline. 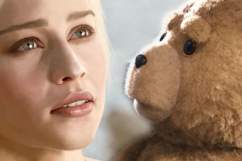 3. They Plan to Remain Friends


Despite the inevitable breakup, the two stars are on good terms. “They have remained friends,” a source told E! News. The two neither denied nor confirmed their relationship, according to Gossip Cop. In November 2012, MacFarlane even described himself as single on his Twitter page, saying that, “Though I’m a single guy, I’m trying to get in some marriage practice by resenting my cat’s purchases.”

4. MacFarlane Was Linked to Other Actresses in the Past


Before dating Emilia Clarke, MacFarlane also had a fling with a few other actresses. Besides that fake hook-up at the Oscars with Sally Field, Seth was linked with stars like Eliza Dushku and Alexis Knapp, based on a report from Celebrity-Gossip.

5. They Are Busy With Other Projects

Clarke has almost finished wrapping up her shoots on Game of Thrones and has also been seen recently on Broadway playing the lead in the stage adaptation of Breakfast at Tiffany’s.