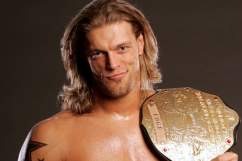 Thanks for staying with us for the long haul, folks. It’s been a fun one, hasn’t it? So many noteworthy wrestling themes have certainly brought up the type of memories wrestling fans hold onto and cherish. You’re about to have the best memories roll around in your thoughts after we FINALLY count down the top ten wrestling themes of all time!

Chris Jericho’s entrance into the WWF was unprecedented. Everyone knew he was a star, but he didn’t have the chance to fully blossom into one while he was in WCW. “Y2J” is wrestling’s greatest rock star and one of the finest technical athletes in the ring. His theme song has gone through several renditions, but it relatively stayed the same. No one can deny the awesomeness of this countdown anthem.

You know the whole backhanded compliment, “It’s so bad, it’s good?” Well, here’a a perfect example – Shawn Michaels’ self-sung theme song. “The Heartbreak Kid” can’t help but wax poetics about how sexy he is and how all the ladies can’t keep their paws off him. When Scary Sherri added her background vocals, the song got turned up to another great degree. If you sing this theme while you’re in the shower, kudos to you. You weren’t the only one. SHAWN, SHAWN, SHAAAAAAAAAAAAAAAAAWN!

Say it with me folks – Bret “Hitman” Hart is “the best there is, the best there was and the best there ever will be.” I’m a diehard Bret Hart fanatic, so his theme being so high on this list should come as no surprise to the people who know me. Bret was a man’s man (he was rocking pink without shame before any rapper!), plus his matches are some of the greatest bouts I’ve ever witnessed. The “Pink and Black Attack” came out to these stirring guitar strings with a sense of coolness that couldn’t be contained.

Dwayne Jo…excuse me..“The Rock” is one of wrestling’s most talented mic holders. He could put down anyone with a bunch of hilarious insults that always lit up the crowd and my TV screen. Rocky’s highest point (in my opinion) was in the year 2000, when he was going head to head with Triple H during his prime. And this theme? A mix of grandeur, excellence, and pure cockiness. We all smell what your cooking, Rock.

“Are you ready…” Yep! D-Generation X were the raunchiest, most fun wrestling stable that young kids were glad to be inspired (or mentally poisoned) by. The Attitude Era can be summed up by this group and one other wrestler who we’ll get to later. DX told everyone to suck it in the funniest way possible and their insulting prodding broke most men. This amazing theme song has stood the test of time.

Everyone who lived during the 80’s and early 90’s HAS to know this song, wrestling fan or not. Hulk Hogan’s inspiring theme about fighting for the “Red, White, and Blue” represents everything great about the Rock ‘N Roll wrestling era. Hogan dropped plenty of leg drops, ate a crapload of vitamins, and spoke to the good man above during his reign at the top of the heap. “Mr. Red and Yellow” was a hero to us all, brother! Fun fact – this theme was originally supposed to be used by the U.S. Express.

Anything Motorhead puts out musically is bound to sound awesome. When they lended their musical talents to Triple H, magic unfolded. “The Game” is the ultimate wrestling theme song. It features a recognizable guitar riff that the crowd knows all too well, it sounds great, and it features a perfect mid-point for HHH to hit his signature pose. When this song pops off at any Wrestlemania, Trips goes into overdrive mode. It’s time to play…”The Game.”

“GONG…GONG…GONG!” Cue all the scared little kiddies who ran into the snack stand when The Undertaker came to the ring. Nowadays, his haunting theme song sends the crowd into a cheering frenzy. Once the arena turns dark, everyone knows who’s about to arrive to the ring. Taker’s entrance is legendary and so is this supernatural theme. “REST…IN…PEEEEEEEEEEEEEEEEEEACE.”

And now we arrive at the greatest wrestling theme song of all time. Stone Cold Steve Austin was the all the rage back in the WWF’s Attitude days. His fascinating mix of beer chugging, middle finger raising, and random attacks ruled my pre-teen world. When he handed out a Stunner, I (and other youngsters, I’m assuming) jumped out of my seat. His theme song made me react the same way. The glass shatters, he raises hell, then leaves. End of story. Austin, you’re the greatest!