Amazon Studios has officially announced it is prepped to air a pilot episode for Zombieland, an upcoming show that’s based on the cult classic film of the same name.

If the show gets enough positive viewer feedback, it will become a permanent original series on Amazon’s Prime Instant Video. Here’s what you should know about the show’s pilot episode, its cast, and Amazon’s other planned pilot episodic shows.

1. The Pilot Episode Will Be Free; Subscribers Can Then Review It


The pilot episode for Zombieland will be produced by Sony Pictures TV. It’s the seventh comedy pilot on the list for Amazon Prime Instant Video. In a press release for the pilot episode, Roy Price (director of Amazon Studios), commented on Amazon’s appreciation for the movie and the other series it’s preparing:

Zombieland is a fan favorite and we can’t wait to see where this story line goes in a serialized format. We’ve been announcing a lot of exciting exclusive content for Prime Instant Video, like Downton Abbey, Under the Dome, and Justified, and we think adding original shows to that lineup is going to make Prime even more enticing for customers.

One the pilot episode is complete and shown to subscribers, viewers can then go and review it through Amazon Prime Instant Video’s website. The audience feedback will determine if the Zombieland pilot episode will proceed into a full fledged TV series for the online entertainment service. Collider noted that the show is being set for a 30-minute run time, but the pilot episode will run at 26-minutes.

2. The Pilot Episode Can Be Seen on Two Different Online Entertainment Services


The pilot episode will soon be available to watch on Amazon Prime Instant Video and LOVEFiLM UK.

3. The Crew and Cast Have Already Been Set

As for the creative team behind this project, it will include the original creative team that worked on the movie of the same name. Writers Rhett Reese, Paul Wernick (G.I. Joe: Retaliation, The Joe Schmo Show), and producer Gavin Polone (Gilmore Girls, Curb Your Enthusiasm) are working on the pilot. Eli Craig (Tucker and Dale vs. Evil) will be directing the pilot. Paul Wernick spoke about the series and what it plans to do:

The cast will include Kirk Ward (The Island) as “Tallahassee,” Maiara Walsh (Desperate Housewives, Switched at Birth) as “Wichita,” Tyler Ross (Milkshake) as Columbus, and Izabela Vidovic in the role of “Little Rock.”

4. Amazon Studios Has Several Other Comedy Pilots in Production
Along with the Zombieland pilot, Amazon Studios is starting production on six other comedy pilots — Alpha House, Browsers, Dark Minions, Onion News Empire, Supanatural, and Those Who Can’t. 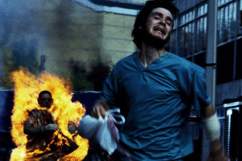 The Top 10 Greatest Zombie Films Of All Time