The sequel to Finding Nemo, Finding Dory, is a reality, and it’s on its way to theaters in 2015.

Here’s what you should know about the film, its plot, who’s returning, and when we can expect to see it our lil’ kiddies in tow:

1. The Script Was Left Over from Disney’s Defunct Circle 7 Animation


In 2005, reports surfaced about Pixar film distribution meetings between Disney’s Michael Eisner and Pixar’s Steve Jobs. When the meetings settled into disagreements between both parties, Disney formed a new animation studio named Circle 7 Animation. Circle 7 Animation was positioned to make sequels to Disney-owned Pixar films, including Finding Nemo. Disney hired screenwriter Lauri Craig to write a draft script for the movie’s sequel. However, before the script was to receive a green light, Circle 7 Animation was shut down after Robert Iger took Michael Eisner’s position within Disney. Pixar was later acquired by Disney. Pixar inherited Craig’s script and handed it over to Andrew Stanton, who reworked it into its current form.

2. Ellen DeGeneres Posted a Pic of the Film on Instagram


Ellen DeGeneres (voice actor for “Dory”) posted this picture of one of the film’s first images on her Instagram.

3. DeGeneres is Returning as Dory


In a press release for the film, Ellen DeGeneres spoke about her excitement for the film:

The director for the film, Andrew Stanton, also spoke about Ellen’s role in this sequel:

There is no Dory without Ellen. She won the hearts of moviegoers all over the world—not to mention our team here at Pixar. One thing we couldn’t stop thinking about was why she was all alone in the ocean on the day she met Marlin. In Finding Dory, she will be reunited with her loved ones, learning a few things about the meaning of family along the way.

4. The Plot Was (Barely) Revealed by Director Andrew Stanton


In that same press release, Stanton revealed the movie’s plot:

Set in part along the California coastline, the story also welcomes a host of new characters, including a few who will prove to be a very important part of Dory’s life.

6. DeGeneres Hyped the Film on Her Show

On Ellen’s daytime TV show, she spoke a bit about the film. That portion of her show can be viewed above.

7. Stanton Comes Off a BOMB at the Box Office


Andrew Stanton was given the reins to this animated sequel, thanks in part to the live-action failure that was John Carter. Disney lost over $200 million on the film that was poised to be another smash hit for the movie studio. 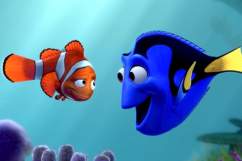 8. Finding Nemo Made a TON of Money
Finding Nemo was the 2nd-highest grossing film for 2003, earning a total of $921 million worldwide. At the box office during its initial release, it earned $380,843,261 in North America and $540,900,000 in other countries. The film is also notable for being the best selling DVD of all time (40 million copies sold as of 2006) and the 23rd highest-grossing film of all time.

9. Finding Nemo Was Acclaimed by Critics and Fans
Finding Nemo was named as the 10th greatest animated film ever made by the American Film Institute in 2008. It also holds a 99 percent fresh rating at Rotten Tomatoes and an average rating of 89 on Metacritic. Famed movie critic Roger Ebert gave the film four stars.

10. Pixar is Putting Out Two New Films Before This One