Gleb kindly posted this for his fans on his Twitter. Thank you, Gleb.

Gleb Savchenko couldn’t be more perfect. He’s caring, sweet, charismatic, talented… and has a rockin’ body. His smile is so genuine and almost like a little boy… who happened to grow up into a heartthrob. Earlier this evening, I was able to catch up with Gleb while he was waiting in the “red room” backstage at DWTS. His love of the show, his cast-mates, and his partner Lisa was overwhelming… almost as much as his charm. He spoke very candidly about his partner Lisa’s fainting spell, his life in general, and fellow cast-mates. So, what did sexy Gleb have to say?

1. The Guy Knows Everybody. Gleb may be the newbie this season, but he’s pretty much known the rest of the dancers on the show for years. So, coming into the DWTS family in its 16th season wasn’t as intimidating as one would think. So how did Gleb know everyone already?

Gleb explains, “Half of the people who are on the show like Karina, Val, Maks, Tony, Cheryl… I knew all of them before the show. I used to live in New York in 2004 and I used to teach in North Carolina with Karina. Every weekend we used to fly there and teach dancing to competitive couples. I use to teach in the same studio as Cheryl in Times Square, so I would see her like every single day. I knew Val for a very long time. We used to have the same teachers and Maks would come. I used to do a show with Tony in Vegas, so we all know each other.”

For the show, Gleb is living in Los Angeles, which he loves. However, he also lives in Hong Kong and Sydney from time to time. Once Dancing With The Stars wraps this season, he has to sit down and decide if he wants to take a serious step and move to LA or if he wants to try to settle in one of the other two places. I can hear the hearts out there breaking just at the thought of him leaving the U.S. Maybe he’ll factor that in to his decision-making.

3. He Really Had No Idea if Lisa Vanderpump Would Dance Last Night. When chatting with Gleb, he was so sincere about the ordeal concerning Lisa’s health. For those of you who were under a rock yesterday, Lisa blacked out in rehearsals, had to go to the hospital, and didn’t let audiences know if she was going to perform last night until the end of the show. But, audiences weren’t the only ones who didn’t know if Lisa could make it.

Gleb tells us, “I’m going to be honest with you. It’s been a really difficult week for both of us with the schedule and everything. We flew to New York because she had to do work with Bravo and I had to go with her because we don’t have a lot of time to rehearse. We flew red-eye and she had to go right to an event, the next morning to do the Michael and Kelly show, back to LA. That’s when it happened. When it happened I was a little bit shocked that she totally blacked out. I was like, ‘Oh my God. Are you okay?!’ She’s still very, very weak and I hope she will have rest. She had a very bad day yesterday, throwing up all day. I didn’t know if she was going to be able to dance. She didn’t answer the phone, no text messages, nothing. The whole production didn’t know where she was, but she was in the hospita with the doctor who told her not to do it. But, she kind of just pushed through and I was so surprised. She was like Super Woman!”
Nonetheless, Lisa pioneered through and did the best job she could under the circumstances… and she actually didn’t do half bad. A big yay for Lisa.

4. Gleb is a Model Professional.

Dedicated Gleb isn’t just a dancer. Come on, with that face and body, did you really think the boy hadn’t modeled before? But, he didn’t just do a few gigs. You name it, he’s done it, from Coca-Cola to Gillette razors, to orange juice commercials, to Dolce & Gabanna. Gleb’s definitely gotten around… when it comes to modeling that is…

5. His Favorite Place in Los Angeles is His Bedroom.

Well, right now it is because he can barely function. If he’s not on the dance floor, he’s racing home to pass out and rest before beating the crap out of himself in dance rehearsals. Just because he’s a professional, doesn’t mean he’s invincible. However, when he does get a spare moment, he tries to squeeze in some gym time before rehearsals or hang out at The Grove. For those of you West Coasters, he’s speaking your lingo. 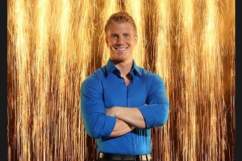 The Bachelor’s Sean Lowe on DWTS: Top 10 Facts You Need to Know Oh, little Giggy. Lisa’s beloved, alopecia-ridden pup, who has a bigger closet than most of us, has made two appearances on the dance floor as of last night. It only makes sense that he sit in on rehearsals… plus he puts Lisa at ease with his presence. On Lisa’s Bravo shows Real Housewives of Beverly Hills and Vanderpump Rules, she often refers to Giggy as her little sex monster. What do you think?… Well, whatever viewers think, they love him. They love Giggy so much he has his own twitter lovers.

Dancing With The Stars Check out @giggyvanderpump in the #DWTS week 1 confessionals. lol soa.li/ejGQW8c

7. Gleb Loves To Take His Shirt Off…

…And we all applaud him for it. Well, the truth is that all the DWTS boys like to show a little skin. The more votes that come in, the more clothes that come off. Keep that in mind, ladies.

8. The Vanderpump Rump Makes It Hard For Him To Concentrate. I’m a straight woman and I have a hard time not staring at that tush when Lisa’s rocking those form-fitting leotards. Gleb doesn’t stand a chance against Vanderpump’s plump rump. Their constant joking and dialogue doesn’t make it easy either, but Gleb lets us know that when it’s time to get down to business, he has to get a little strict.

9. He’s in a Motorcycle Gang in Hong Kong.

Okay. I fudged a little. Gleb loves to ride, but his motorcycle is in Hong Kong right now. Close enough. It’s okay though… I aim to disappoint.

A beach bum anyway. He loves the beach, relaxing, and catchin’ a tan in that California sun any time he can. He hasn’t had much time with DWTS taking over his life, but maybe once the show wraps, he’ll be able to soak up some rays. Send us pics when you do, Gleb! We love you, Gleb and Lisa!