First The Bachelor and now Dancing With The Stars. Sean Lowe is making waves as everyone’s guilty pleasure, whether they want to admit to watching him or not. Whether people are reading the tabloids about the latest on his engagement to Catherine Giudici, obsessing over his sexy physique, or rolling their eyes at his costumes on DWTS, he’s definitely a hot topic right now. Here’s a little more juice on what’s behind those abs and pearly whites…

Just give me another chance. I’ll sweat less and take my shirt off next time. #DWTS #TeamMurgalo

Who knew that I’d need Hydroxycut when I look this good. Guess we all need a boost even when we’re near perfect.

That’s right, ladies and gentlemen. The Bachelor’s Sean Lowe is no longer the star of the show. Dancing With The Stars has elevated Sean Lowe’s six-pack to stardom. Will his abs take home the mirrorball this season?! I wonder what Lowe’s abs will have to say tonight…

On an episode of DWTS, as he wipes the dripping sweat from his brow using his T-shirt, he says to his sexy partner Petra Murgatroyd, “You wanna hear something gross? I never showered today … or yesterday.” He then attempts to get a high five from her and she backs away in disgust as he smiles. Nonetheless, I’m sure this didn’t deter any of the panting women out there rooting for Sean and his un-hygienic hotness.

3. Sean Has Invented a New Form of “Planking” Titled the “Murgalo”

Using a combination of Lowe and Murgatroyd, Team Murgalo was born and soon morphed into the Murgalo. Jimmy Kimmel describes the move as, “The Worm if you stop halfway through it. (Then fall asleep!)” Regardless of what it looks like, it’s definitely catching on across Twitter and Instagram. Even Lowe’s grandparents are getting in on it!

Animals are also rallying together to show their Murgalo love.

Well, the president of a company called The Factory Girl. The Factory Girl is a fashion and furniture company that actually sells some pretty chic merchandise that won’t kill your bank account. Their creative custom-made furniture is insane. To boot, their handbags, wallets and other accessories are beyond awesome. Lowe and two friends of his established this rad brand just a year ago and have been busting out products ever since.


What Sean was like before the fame. (Via RadarOnline)

He may be on Dancing With The Stars now, but Lowe wasn’t always as eager to strut his stuff on the floor. On an episode of DWTS, Lowe confessed, “Growing up, I was never the guy who was tearin’ up the dance floor. I was the guy who was kind of hangin’ out on the side, just nodding my head. I can’t get away with just nodding my head anymore. I’ve got to get out there and dance. I’ve got to learn how to be graceful and fluid and smooth… and that’s a challenge for me.”

6. Lowe Can Send a Thank You Note to Hydroxycut for That Body, Which is More Toned Than Ever

After The Bachelor, Lowe signed on to be the brand ambassador for the weight-loss supplement Hydroxycut Hardcore. That’s right. His very own supply of Hydroxycut is what keeps his energy boat afloat through all the grueling dance rehearsals behind the scenes of DWTS.

When it comes to being a die-hard Vegan, that is. While Sean dines on armadillo, Catherine writes all about her love of vegan food, calling herself an “opportunistic vegan.” This basically means she cheats every once in a while to indulge in the carnivore lifestyle. Her latest blog for Seattleite.com is titled, “Meatless Mondays: St. Dames.” I wonder how many times Catherine cheated so far this month…

8. Sean Lowe Exposes Himself and Gets a Little Touchy

Well, what do we have here? Is that Lowe posing in a fitness magazine? Why yes it is … not that we blame him. Even so, this born-again virgin definitely knows how to tease.

Nonetheless, though he gave himself the “born-again” title, he’s very protective when it comes to that aspect of his personal life. From the looks of his sexy photos, it’s one of the only things he doesn’t bare. So, keep the sex talk to a minimum next time you’re chatting up the DWTS star, even though it might be a little tough when leafing through some of his fitness photos.

9. Sean Lowe is a Closet Nerd

Everyone can see he has his goofy side, but he’s definitely got the nerd gene, telling Life & Style magazine, “Most people don’t know that I’m weird and nerdy. I love to read, and I do nerdy things. I do math in my head for fun. I do crossword puzzles; I quiz my friends on historical facts. Most people don’t peg me that way. I don’t like clubs and bars. I’d rather see an indie film at a local theater.”

By looking at this photo (above) of fiancee Catherine’s website, it’s no wonder the two are a match made in nerd heaven. Nerd power!

You would think that after sending girl after girl packing on The Bachelor, he would have gotten used to it. But, that’s not the case. As weeks went by, it was visibly more difficult for him. It makes you wonder how he’ll react when he finally has to retire his dancing shoes after DWTS wraps. Don’t let the photo below fool you. He’s not always so smiley when he’s waving. 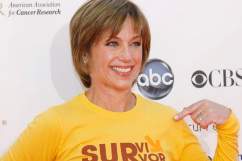 Dorothy Hamill Drops Out of ‘Dancing With the Stars’ Competition