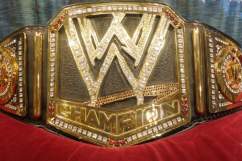 WWE’s latest wrestling extravaganza, WrestleMania 29, took place in New Jersey’s MetLife Stadium on April 7, 2013. Epic rematches took place, grand entrances were presented, and new records were set. I had the pleasure of being there live and I must say — it was an experience that all wrestling fans should experience just once before they die.

Here’s what you need to know about who won, who lost, what was cut from the show, and which celebrities made an appearance.


In a rematch from last year’s WrestleMania 28 main event, John Cena and The Rock did battle. But this time, both wrestlers fought over the WWE Championship. Cena and Rock butted heads for 25 minutes as the crowd chanted their displeasure for Cena and their appreciation for The Rock. The end of the match came when Cena finished The Rock with one final Attitude Adjustment. Cena and Rock seemingly made amends when both men hugged and sent the crowd home happy with one final image: The Rock held up John Cena’s hand as the victor of their epic clash. Take a peek at Cena and his newly won title:

2. The Undertaker’s Wrestlemania Streak is Now 21-0


The Undertaker’s famous WrestleMania winning streak was on the line against the “Voice of the Voiceless” CM Punk. Punk arrived to his theme music (“Cult of Personality”), which was performed live by Living Colour. ‘Taker made his ominous presence felt when he hit the ring as always. Once Punk and ‘Taker finally engaged, it was a match for the ages. ‘Taker mercilessly beat on Punk, but Punk kept himself in the fight by using his entire moveset against the “Deadman.” Punk even hit ‘Taker with his own “Old School” signature move, plus he dropped a top rope elbow onto ‘Taker while he laid out on the Spanish Announcer’s table. Spanish Announce Table>Japanese Tables. The Undertaker laid Punk to rest after hitting him with the Tombstone Piledriver. ‘Taker’s WrestleMania win/loss record is now 21-0. Cool side note: Punk’s purple, grey, and black ring tights were a throwback to ‘Taker’s old ring attire. Punk…you’re a genius, my tattooed friend.


Before we get into the match, this must be said – Lesnar look a lot better than he did when he returned last year. When he walked down the ramp, his badassery was multiplied by 100 thanks to his beanie hat and menacing stroll to the ring. Former UFC champion Brock Lesnar took on “The Game” Triple H in a SummerSlam 2012 rematch. If HHH lost this time, he would be forced to retire. Lesnar broke HHH down with plenty of suplexes and chair shots while Paul Heyman watched in glee. Shawn Michaels even interrupted the match, but he was caught by Lesnar in a devastating F5. HHH gained the upper hand when he went to work on Lesnar’s arm, as he hit it with a steel chair and locked on Lesnar’s own submission hold. HHH saved his career in this no holds barred match when he laid Lesnar out with a Pedigree on the steel steps. HHH has to send some thanks to his best friend Michaels, as he knocked Paul Heyman out with Sweet Chin Music to stop him from interfering.

4. The Results of the Rest of the Wrestlemania 29 Card Are as Follows


The Miz wrestled away the Intercontinental Championship away from Wade Barrett, The Shield defeated the team of Sheamus, Randy Orton and the Big Show, Mark Henry beat Ryback, Team Hell No retained the WWE Tag Team Championships over Dolph Ziggler and Big E Langston, Fandango pinned Chris Jericho, and Alberto Del Rio made Jack Swagger tap out. It’s interesting to note that Swagger and Zeb Colter didn’t get the usual full entrance most wrestlers get at ‘Mania. Colter’s opening promo speech more than made up for their lack of an epic arrival to the ring.


A few WWE faces made their freshman debut at 2013’s WrestleMania 29 event. Those faces include The Shield (Roman Reigns, Dean Ambrose, and Seth Rollins, who were super over), Ryback (in a loss to “The World’s Strongest Man”), Big E Langston, Zeb Colter, and Fandango (I still can’t say his name right…).

6. One Match Was Cut from the Show

funkateers much love don’t get down we will work harder! we will be better! best thing about being down is getting back up #hardindapaint !

One match that was cut from the show was the team bout pitting Brodus Clay, Sweet Tea (Tensai), Naomi, and Cameron vs. Rhodes Scholars (Cody Rhodes and Damian Sandow) and The Bella Twins. Brodus Clay sent out a few tweets when he discovered he wouldn’t be wrestling at ‘Mania, which can be read above. Sweet Tea (Tensai) also sent out a Tweet:

Everything happens for reason.


Jersey Shore’s Snooki showed up for ‘Mania, and it’s safe to say she wasn’t given a warm welcome. However, New Jersey Governor Chris Christie received a warm welcome (in the frigid weather) from the crowd. The crowd seemed to be split on Diddy as performed a few of his most popular songs (I hated his theme song for the show, but I couldn’t stop reciting the lyrics to “All About The Benjamins” when he preformed it). Comedian Judah Friedlander and former New York Giant Michael Strahan also showed up.

WZ was told that the creative team initially pitched an eight-man double ladder match for WrestleMania, which would have seen both the U.S. and Intercontinental Titles on the line (one man could win both, or two separately), however Vince McMahon nixed the idea as he is reportedly not a big Antonio Cesaro fan.

9. It Set Records for Attendance & Took in $12 Million


During the final stretch of the show, WWE ring announcer Justin Roberts announced that a crowd of 80,676 fans were all present at MetLife Stadium in East Rutherford, New Jersey. The fans cheered and the obligatory fireworks display followed soon after. According to WWE, the total live gate for WrestleMania 29 netted $12.3 million. This means that the WrestleMania 29 is the highest-grossing event in the venue’s history.


The 2013 WWE Hall of Fame Class were all honored during the show. Mick Foley, Trish Stratus, Booker T., Bob Backlund, Donald Trump (who was overwhelmingly booed by everyone in attendance!), and Bruno Sammartino took a bow before the crowd as they were once again honored on wrestling’s biggest stage. On a side note, make sure you tune into Tuesday’s USA channel airing (10 p.m. on April 9) of the WWE Hall of Fame 2013. If Booker T. or Bruno Sammartino’s speeches don’t bring you to years, you simply have a heart of ice. 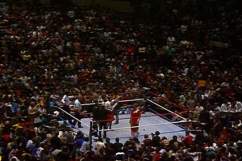 The Top 10 Wrestling Theme Songs of All Time