According to documents obtained by TMZ, Justin Bieber is requiring all party guests to sign a non-disclosure agreement before stepping foot into his mansion in Calabasas, California.

The contract states that Bieber party-goers are not to release information regarding the party to the public, including videos, pictures or any type of recording and that he is not responsible for any damages or injury.

“Under no circumstances will you divulge the details of you entering and being on the Property or engaging in the Activities by any means or through any media whatsoever, including without limitation, through photographs, video, blogging, texting, ‘Tweeting’ or posting any such information on any social media site,” the contract says.

Oh, and if the contract is breached, the Biebs will sue you for $5 million.

Here’s a copy of the document:

TMZ reports that while contracts like this are not uncommon among celebrities, it is worth mentioning after a year of bad press for the 19-year-old superstar. Just a few months ago pictures of a wild party at the Bieber mansion surfaced on the internet after his best buddy Lil Twist threw a rager while he was away. 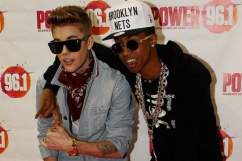 The singer is seemingly just trying to protect himself, but who wants to go to a party that they can’t talk about the next day while recovering from a massive hangover?