Beyonce’s bottom is under attack.

While she was singing her hit “Irreplaceable” to fans on her World Tour in Denmark, a young man in the crowd got a little handsy and smacks her on the behind as she turned to walk away.

With that, Beyonce stops in the middle of her song to tell the man she will have him escorted out. TMZ reported that it’s unclear whether or not Mrs. Carter followed through with her threat. Either way, she definitely showed that fan that he is “replaceable.”

As a married woman with an alleged child on the way and a baby at home, it should be common sense that Beyonce probably wouldn’t be too keen on being smacked on the ass like a piece of meat. Nonetheless, she handles it with class.

This isn’t the first time that a Beyonce fan has had the urge to give Mrs. Carter a little smack on her World Tour. In the video below, as the star makes her way through the crowd last month in Serbia, a female fan gets a little out of control with her “high-five”.

As you can see below, only one person is allowed to smack Beyonce and that’s her husband, rapper Jay-Z. 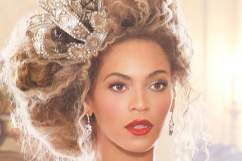