Share via E-mail Share on WhatsApp
With witty humor, gorgeous cinematography, and some of the best action sequences I’ve ever seen, Fast & Furious 6 may be the best action film of the summer.

WARNING: This review is filled with spoilers. Readers beware.

I never thought I’d gush about Fast & Furious 6 — especially since I was such a fan of Fast Five — but that’s what I’ve been doing since I saw the film. The action scenes were obviously going to be great, but you’ll underestimate how massive these actions scenes are. The trailers simply don’t do them justice — only by watching the film in theaters will you be able to grasp the magnitude of the action scenes. Punches, cars, and bodies flying left and right, this is definitely the most action packed film in Fast & Furious series.

The movie starts off with Dom an Brian racing on the curvy streets of the Cayman Islands. Brian’s child is born, and it’s clear that the film is showing that even criminals grow up sometimes.


But, unbeknownst to them, a member of their family is still alive and kicking (literally): Letty, Dom’s ex girlfriend. 2 films ago, it was assumed that Letty was shot in the head, but it seems like the bullet didn’t kill her, just gave her amnesia (yes, it’s far-fetched, but you’re not watching Fast & Furious 6 for the plot). 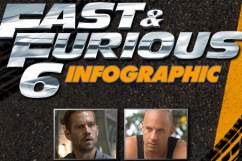 Now, she works for Owen Shaw, a ruthless and conniving former member of an elite British military squad. Now, he spends his days by organizing and carrying out complicated and complex heists to complete a device called “Nightshade,” a device that can shut off the power in a region. Obviously, in the wrong hands, such a device could be catastrophic, so Shaw obviously wants to sell it to the highest bidder.


Paul Walker has grown up with Vin Baker in the Fast & Furious franchise.

Luke Hobbs aka Dwayne “The Rock” Johnson gathers up the crew from Fast Five and offers them immunity and a chance to go back to the United States in exchange for helping Hobbs and the US government capture Owen Shaw and his gang before they manage to get all the components for the device.

Basically, that’s the entire plot. There are a lot of twists and turns that will definitely catch you off guard, but, as with most Fast & Furious films, the action scenes are what make the movie. There are essentially three main action sequences: the first is when the gang first find’s Shaw’s hideout, the second is when Shaw was storms a NATO base, and the third is an excellent scene that’s been heavily promoted in the trailers and, without giving away too much, involves an airplane.
[inline_share text=”Share this article!”]

The action scenes were so over-the-top that they set a new bar for action films, in my opinion. I consider myself a big fan of action films and Fast & Furious 6 may have the best action set-pieces I’ve ever seen. Director Justin Lin did a fantastic job not only conceptualizing the action scenes, but actually managing to guide accomplished action actors like The Rock and Vin Diesel (by the way, The Rock and Vin Diesel essentially have a tag team match. It was awesome.) through such difficult scenes is commendable as well. Lin’s direction and vision will certainly be missed in Fast & Furious 7, but we have faith that Fast & Furious 7 will be as equally epic (more on that later).

Vin Diesel, Paul Walker, and The Rock all stole the show with their impressive acting — especially Paul Walker. This is not the stoic and emotionless Walker from 2 Fast 2 Furious who always says “bro.” Walker showed a lot of growth throughout the movie, not only in his acting but his character as well, and it was quite refreshing.


The most jaw-dropping scene came after the credits started rolling. Similar to other blockbuster franchises (see: The Avengers), the scene not only confirmed that there would be Fast & Furious 7 but also gives us a glimpse of the villain from the upcoming sequel too. Yes,when you see who it is, your jaw will absolutely drop. 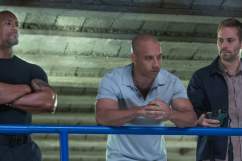 Stunning actions scenes, better-than-expected character development and acting, and complex and intricate sets, Fast & Furious 6 may be one of the best action movies in recent memory and only gets us more excited for Fast & Furious 7.

We want to know what movies you’re excited about this summer!