This has been a bad week for Lil Wayne.

The rapper, who has been a spokesperson for Mountain Dew, was dropped by the beverage company over an offensive rap verse in which he compared a civil rights icon to rough sex, reports TMZ. The song “Karate Chop” stirred up controversy back in February for its line: “Pop a lot of pain pills, ’bout to put rims on my skateboard wheels… beat that p***y up like Emmett Till.”

In 1955, Emmett Till was murdered at the age of 14 after flirting with a white girl. He was beaten beyond recognition, shot and thrown into a river. His murder trial was one of the major highlights of the early civil rights movement.

Mountain Dew, owned by PepsiCo, decided to part ways because of the reference.

“We do not plan any additional work with Lil Wayne moving forward,” PepsiCo said in a statement on Friday. “His offensive reference to a revered civil rights icon does not reflect the values of our brand.”

On Wednesday, The Los Angeles Times reports that Lil Wayne issued an apology to Till’s family and told them that he would remove the line and refrain from using it at live concerts.

“It has come to my attention that lyrics from my contribution to a fellow artist’s song has deeply offended your family. As a father myself, I cannot imagine the pain that your family has had to endure,” he wrote. “I would like to take a moment to acknowledge your hurt, as well as the letter you sent to me via your attorneys.”

The Till family has rejected the apology, however, and said that it “falls short of an apology.” 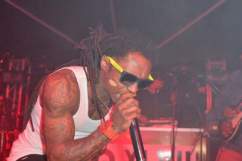 Lil Wayne Hospitalized with Another Seizure – Released This Morning