If you thought you’ve seen the last of the drama between Nicki Minaj and Mariah Carey, think again.

Following a jab at Nicki by Mariah on last night’s episode of American Idol, Nicki lashed back with a series of tweets on Thursday, calling Mariah “insecure” and “bitter,” reports TMZ.

What u SHOULD be doing (wit your messy ass) is asking why a woman SO successful at her age, is still so INSECURE, and bitter @perezhilton

Nicki also made a reference to the rumors that American Idol producers were looking to replace Mariah with former judge Jennifer Lopez.

All dem #1s but JLo phone ringin? Lol. I guess having a personality, being a secure woman, and giving genuine critique still trumps that.

The latest drama between the pop stars started after Mariah teased Nicki for never having a #1 single on the Billboard Hot 100. The rivals are currently tied for both having 44 Hot 100 hits, but Mariah has Nicki beat for holding the record for the most weeks at the top spot for her song One Sweet Day.

Bwaha! Burn? Shes sad i tied her record for Hot 100 entries in only 3 years of being in the game. Yep, a black female rapper @perezhilton

The rivalry between Nicki Minaj and Mariah Carey started at the very beginning of their time working on the reality television show together after getting into a heated argument on the first day of filming. 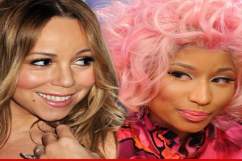 Nicki Minaj and Mariah Carey Throw Down on American Idol