Has Amanda finally received the deal she’s been waiting for? Just yesterday Amanda Bynes was spreading her loud-mouthed tweets all over Twitter. Today? She faces an enticing offer for a rap deal. What will the internet bring us next?

This is what I’ve been waiting for #SaidNoOneEver Amanda Bynes offered rap record deal wet.pt/11azS7l

A few days ago Amanda Bynes did in fact receive a record offer from Producer Daniel Herman of Chinga Chang Records, but given her current status as a brat-tastic Twitter queen with a bad attitude and possible mental deficiency… do you think this is a good idea for her?

She’s phenomenal and that’s the crazy thing about this…This is the perfect home. This isn’t just a gimmick.

I grew up with Nick and the orange couch. I know she has talent. I’ve heard her sing. I wanna get her in the cutting room and see what she has… Bynes is more gangster than Drake, very attractive, and very talented.

Could that be? Is the very rapper Drake who Amanda has been abusing left and right over Twitter below her own rapping ability? But there’s more, too. Herman comments on Amanda’s Twitter games by saying:

If you look at her actions and attitude she represents hip-hop a lot better than Drake. Musically, this girl knows how to carry herself… She is not crazy, she is not on drugs. She’s just hip-hop!

Maybe this Daniel Herman guy knows what he’s talking about when it comes to Amanda. Or, maybe he just boarded the crazy train and he’s in for the ride of his life! Let’s hope he doesn’t regret this… let alone become Amanda’s next Twitter victim! If he even has one, we recommend he delete his Twitter account in 3…2…1… 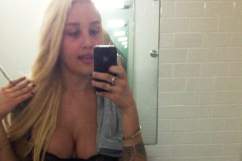 Amanda Bynes: Topless Twitter Pics and Her Evolution of Crazy