Johnny Depp turned a whopping Five-Oh yesterday! Can you believe it? From his fantastic acting in Edward Scissorhands to Pirates of the Caribbean to Charlie and the Chocolate Factory… Johnny hardly looks as though he’s aged a single day. Happy birthday, Johnny! And in the name of this grand celebration we’ve put together a list of 10 juicy facts you don’t know (and definitely want to) about Mr. Depp. For all you Johnny-craving fans out there (we know you are), take a look!

1. Johnny is a Vegan

Is Johnny Depp the latest celeb to go vegan?

Not only is Johnny sexy, mysterious and an amazing actor… he takes good care of himself, too. The star reported taking up a vegan diet for two reasons: to lose a bit of the belly he’s accumulated over the years, and most importantly to impress his new lady Amber Heard. She’s also part of the reason Johnny gave up drinking, reports ecorazzi.com. Yes Johnny, looks like we are ‘out of rum!’

2. He Visits Sick Children in Character

As Johnny gets older he kind of reminds us of fine wine because, well- he only gets better with age. Just when you think he can’t melt your heart any further, he does something like dress up in his Jack Sparrow garb and drop by children’s hospitals to say hello. Talk about a class-A guy. But wait, there’s more! You can bet we’ll be seeing more of him in long hair, leather boots and eyeliner because just as he turned 50 he announced to Inquisitr.com that a Pirates of the Caribbean 5 is coming soon! We can’t wait to see what Captain Jack Sparrow has in store for us next.

That’s right, Johnny has a new movie coming at us and no- this one does not involve pirates. The new film, directed by Gore Verbinski, is a Western action film. It’s called ‘Lone Ranger,’ starring of course- himself, Armie Hammer and William Fichtner. Throughout the plot, a Native warrior named Tonto (played by Johnny Depp) retells the story of a legendary man known as John Reid. And although we all know Johnny isn’t a ‘lone ranger’ in real life, you can be sure his multi-faceted acting personality will be perfect for the role. Make sure to head out to theaters on July 3 for its premiere!

Check out the provoking trailer here!

johnny depp when he was 16 omfg twitter.com/zoewbuu/status…

If you think Johnny Depp is a hunk now, you have no idea what you missed back when he was sixteen. Above are a few photos of him flashing his teenage bod that were posted on twitter. We have yet to see Johnny Depp’s unattractive side (if he has one). Sometimes we think he popped out of the womb ready to go with dimples and a six-pack.

Johnny Depp with The Kids 1982 – What I like About You.Guys! Johnny with his old band!! AWESOOOOOOME!! :D youtu.be/ktfhf5U1-Uc

This may be hard to imagine given his hard-earned reputation as an actor, but Johnny actually used to be the guitarist of a band called ‘The Kids’. The band was formed when he was only 16 years old (see visual above), which was also the year he dropped out of school. According to Biography.com, his band lifted off for a while but by the time it came to pay the bills, it wasn’t long before his rockstar dreams fell to pieces like most other teenage hopefuls. But on the bright side, good thing it did- otherwise he wouldn’t have become the amazing actor he is today.

50-year-old Johnny Depp has won the title Sexiest Man Alive Twice. What is Johnny Depp’s most attractive feature to you?

Is that really a surprise? We don’t think so, but we’re excited about it anyway. For the first time in 2003 and again in 2009, Johnny Depp was titled Sexiest Man Alive according to People Magazine. Even back when he was co-stars with the young and beautiful Keira Knightley during Pirates of the Caribbean: The Curse of the Black Pearl, she commented on both his looks and personality to People.com, saying:

That sounds like an A+ in our book. There’s no wonder he won the title yet again six years later.

7. Johnny Wants to Die in The Form of a Beverage

Johnny Depp plans on having his cremated remains poured into a cask of whiskey, and requests every attendee at his funeral to take a sip.

I’d watch the invitation list to Johnny’s future funeral very closely if I was any of his closest friends and family. According to Twitter, Johnny’s last wishes are to be cremated, poured into a whiskey bottle, and consumed as a beverage by his loved ones. How’s that for a going away party? We always knew Johnny was pretty out there- but this seems like kind of a stretch even for him. Perhaps, he was being metaphorical. After all, isn’t he the greatest actor of all time?

8. He Once Mooned a Teacher, And Liked It

As all good things come from even greater beginnings, Johnny Depp is probably the best living proof of that. At sixteen years old and even before he dropped out of school and joined a band, according to Celebuzz.com Johnny got suspended from school for mooning his teacher. That’s right, butt-in-face status. But as big of a troublemaker as little Johnny might have been back then, we forgive him because we think he’s made up for it by becoming the amazing actor, father, and not to mention overall person he is today. On that note, can someone really complain about being mooned by Johnny Depp? Obviously that teacher would reconsider her opinion today.

9. Johnny Received the Highest Paycheck for a Single Movie

Johnny Depp holds the record for the largest paycheck for a single movie! For which one? —> omgf.ac/ts/MVj

When it came time to film the fourth sequel of Pirates of the Caribbean, Johnny Depp was paid more than any other actor or actress out there. As reported by Omg-facts.com, Depp received more than $53 million to play the character of Jack Sparrow, which is more money than any single actor or actress has made per movie. Well done, Mr. Sparrow.

Just when things couldn’t get any weirder, we learn that Johnny had a fascinating ability when was just a little kid. He tells Celebuzz.com that when he was younger he used to buy pet lizards and train them to do all sorts of tricks. Who knew lizards could be trained? One thing is for sure, if there was one person who could teach a lizard tricks it would definitely be Johnny Depp. Perhaps his lizard-taming abilities are a hobby he will pick up again once he approaches retirement from acting. But for now, we are sort of glad he has left his lizard days behind him. 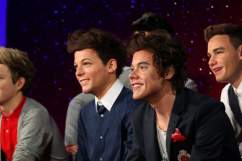 One Direction and The Wanted Call a Truce: Will it Last?