‘Beliebers’ and ‘Smilers’ listen up… rumors of a new romance spark as Miley Cyrus and Justin Bieber were seen canoodling at Breacher’s Madhouse in L.A. while enjoying a Juicy J concert.

and if the are not together they are still best @mileycyrus @justinbieber jiley twitter.com/biebers9073585…

Newsdigg.net reports the pair, who have been close friends for years now, flirting incessantly at this popular celebrity joint early morning on Sunday. Apparently their weekend party rounds weren’t finished just yet. Uh-oh, does that mean Liam is out of the picture for good?

TMZ.com also reported ‘Jiley’ leaving the party side by side, but we still don’t know where they were headed. Sources add that the two grabbed a romantic dinner after leaving concert. Was it a date? No one knows for sure, but we have no problem letting our imaginations run wild for this one. Biebs’ loud and proud leopard-printed ride was also spotted leaving Miley’s L.A. quarters on Saturday. Something fishy is going on… Could the two be starting to seal the deal as more than just friends?

I ship Jelena but Jiley is so more better ♥ and yeah Miley is a #Belieber so i love her! @mileycyrus + @justinbieber = #ThatPOWER

Your friends would love this! 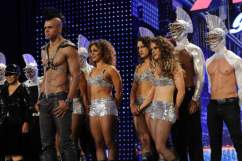