#RHONJ is a force of nature! Join the ‘Jersey’ ‘Wives for the season premiere TONIGHT @ 8/7c. Preview: bravo.ly/11yF31X

We are BACK tonight! Who’s ready for the Season Premiere #RHONJ? #seasonpremiere #rhonj #bravo fb.me/30Vuv8bSV

Unbelievable damage to the Gorgas and Giudices. 8:06pm

Milania is a lot more well-behaved than last season. 8:10pm

It has to be unbelievably difficult for Jacqueline. I don’t know how she does it with her son. 8:16pm

Rosie’ back! Not feelin’ the scarf and hair on her, but love her blunt mouth as always. 8:19pm

Oh, Gia… butt out and let your little sister have a moment. 8:22pm

Caroline, I love you, but I think you picked Hoboken for some Albie/Chris time too. It’s okay to hold on lol. 8:27pm

I love this text war high school crap. And, Joe Giudice is so constructive with his input. 8:30pm

Watching #RHONJ. What does everyone think so far?

Wendy Williams, I Love You!

@teresa_please you know I will be talking tomorrow. xox #RHONJ

An 11-year-old with a Fendi bag. That’s. Just. Unnecessary. #rhonj

If anyone really stuck to their own business, there would be no show. 8:45pm

More Live Blogging for the Exclusive Watch What Happens Live with Teresa Giudice tonight at 11:00pm!

I’m back tomorrow and u know I’ll be talking about the #RHONJ premiere. xox See u in the morning. 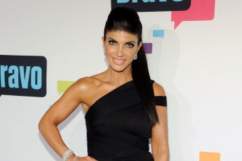 Scenes from next week show that Dina and Caroline haven’t fixed anything. 11:09pm

Sounds like @teresa_giudice is trying to put an end to the song feud w @melissagorga – do you believe it or think it’s just a front? #WWHL

@bravoandy what the hell just happened with you cutting @teresa_giudice off mid sentence?!?!Back to the phones!!!