So, what happened to the NJ Housewives when the hurricane hit? The Manzos lost power for 12 days, Jacqueline and Chris had some fallen trees and lost power, the Wakiles’ rental home at the shore is pretty wrecked, but the Giudices and Gorgas pretty much took the cake in damages as far as their shore houses go. The Gorgas’ second home’s whole inside, along with the Giudice’s, was completely ruined from water damage… all their furniture, floors, ceiling, you name it. Nonetheless, all Joe Gorga said to his wife was, “This is nothing. Other people lost their homes. Just gotta rebuild. I have you and that’s all that matters.”

Other scenes show the housewives doing their parts in helping the cause by donating their time and their possessions to those in need.

Your friends would want to hear about this, share it!

Antonia and Milania act more like grown-ups than their mommas. #rhonj

Who knew that the most mature ones would be the children?

Omg Antonia wrote her letter to Milania. I could just cry #RHONJ

Young cousins Milania and Antonia become pen-pals in an effort to see each other amidst their Mommies’ drama… It works.

@chris_laurita @jaclaurita sending you both warm wishes for your bravery in sharing such an important message! #autism #rhonj #awareness

4. Teresa’s Daughter Gia Joins In on the Drama as a Pot-Stirrer

Gia is catty like her mama. That’s what happens when you talk grown folks business in front of children. I agree with Melissa. #RHONJ

It’s unfortunate to see, but it seems 11 year-old Gina is becoming involved in the adult mess. First she tells her happy younger sister that she wasn’t invited to their cousin’s birthday. Then, she takes cousin Antonia’s sweet letter to her foul-mouthed father to stir up a little more drama. Nip this in the bud please, Teresa.

5. The Manzo Boys Are Bitter About Not Being in the Season’s First Episode

Jun 2, 2013 | Boys are upset they’re not in the first #rhonj episode tonight by laurenmanzo on Keek.com

Caroline Manzo moved into Maxwell Place into my friend’s old apartment! I can tell by the view/cabinets… #RHONJ… fb.me/KwYL7YRZ

Didn’t chase my boys – I raised them to follow me EVERYWHERE, don’t let go!!!!BWAHAHAAAAAHAA…… silly#RHONJ

With all the baby birds out of the nest, Mommy and Daddy Manzo have decided to try renting an apartment in Hoboken to see if they want to downsize from their giant home. Their daughter Lauren thinks her mom chose Hoboken to follow her two sons who have moved there. Caroline insists it is not the case.

@teresa_giudice why involve ur 11 yr old? You’re validating the concerns of @melissagorga .Check Merriam Webster for the definition #rhonj

While texting Melissa Gorga in a passive-aggressive digital war, Teresa actually allows her daughter to take her phone and engage in texting Gorga herself. Bad form.

8. Caroline is the Sister Joe Gorga Never Had

Did my Mom just quote the Godfather? #RHONJ #PAPA!!!!!

In a mafia-esque sit-down, Caroline tells Joe she wants to help him put his family back together. With Joe crying, Caroline says she will actually go talk to Teresa for him in order to help. Melissa thinks its none of her business while Joe is happy, looking at Caroline as the sister he never had.

In an effort to start making some sort of amends with Melissa, Teresa tells Melissa she will move her daughte Gabriella’s communion since it’s the same date as Melissa’s daughter’s communion. But, she makes a point to tell Melissa that she’s being the bigger person.

10. The Season Highlights Are Shown

A little sneak preview of the season is shown and boy is it intense.

Everyone rides in a party bus and Teresa’s young daughter jumps on the pole in the middle and strikes a stripper pose saying, “I’m Melissa. I’m going on the pole.” Uh oh. Sounds like Mommy’s been telling rumors to her young children. How appropriate… and on so many levels. Teresa says she regrets things she’s done, so hopefully this was included in that. The Wakile’s marriage appears to be in a lot of trouble. There must be something in the Housewife water because Albie is worried about his parents’ marriage and rumors swirl about Melissa cheating. Teresa and Joe’s dad is very sick in the hospital, which puts more pressure on their making up. And, the moment we knew would come…the two Joe’s have a serious fight. Stay tuned this season.

Your friends would want to hear about this, share it! 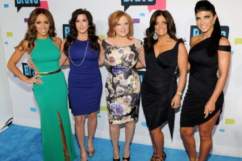