The show, which will premier August 19, is a sports entertainment talk show that will cover big topics such as the NFL, along with much-less-covered sports such as tennis. The show will revolve around a panel led by Philbin as they interview big names in the industry and debate various subjects. It is not yet known who will be on the panel.

“We’ve got a nice little panel of people together, a lot of friends,” Philbin says about the show. “And if a celebrity like George Clooney comes to town with a movie, we’ll play clips from his movie—but we’ll also talk to George, who grew up in Cincinnati, about his sports roots, like if he’s still a big Reds fan. I’m happy to be part of sports TV. If you look at the ratings, that’s what’s on top. Sports is the biggest hit TV has these days. It’s all there on the field, pal.”

Producer Michael Davies, who worked with Philbin on Who Wants To Be a Millionaire, said the show is mainly meant to be funny.

“We’re not a sports news show; we’re a sports entertainment show,” Davies said. “The standard for us: We’re not trying to set the agenda of what America are talking about on a daily basis. We’re frankly trying to be funny a lot of the time.”

Philbin is returning to television two years after leaving Live With Regis and Kelly. 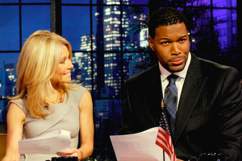