Rob Kardashian’s ex-girlfriend Adrienne Bailon said on a recent episode of her new talk show, The Real, that she is currently in the process of getting a tattoo of Rob’s name removed from her body, reports E! Online.

The former Cheetah Girl got Rob’s name inked on her behind, while Rob got her name sprawled across the left side of his rib cage when the couple dated a few years ago. Rob still sports his now meaningless tat, but Bailon admitted that she regrets the body art and is in the process of getting it removed.

“Everybody knows I have the ratchet-iest booty tattoo of an ex-boyfriend,” Bailon said. “I don’t know what I was thinking.”

However, the process isn’t easy. Tattoos are meant to be permanent, so removing them is difficult, and very painful.

“It does not feel good,” Bailon said. “You could smell your flesh burning. And it’s my ass flesh burning! It’s awful. Ten-letter last name, Kardashian. It’s pretty bad, yeah. Now that is a ratchet tattoo. I made a very bad decision. Don’t follow my example.”

Bailon said that her friends urged her to get the tattoo taken off as soon as the couple split in 2009, but the 29-year-old TV personality said she wanted to wait to find the right person so a horrible scar wouldn’t be left behind.

What is the worst tattoo you ever got? 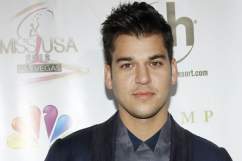