With Jack Nicholson quitting acting and retiring from his long, prolific career, we found the 5 best YouTube videos showing his amazing range of characters. From The Shining, to One Flew Over the Cuckoo’s Nest, from About Schmidt, to As Good as It Gets, Jack’s range and abilities are unparalleled over his 5 decades of acting.

5. Jack Can’t Order What He Wants, He Gets Upset. Very Upset.

4.The Funniest Moments from “As Good as it Gets”

“How do you write women so well?”
“I think of a man and I take away reason and accountability”

Jack Nicholson – Funniest bits from ''As Good As It Gets''One f my favorite actors in one of my favorite films These are my favorite Jack Nicholson lines from the film. I love the first huge rant the most **This is not copyright intended i do not own any of the clips shown in this video. For entertainment purpose only**2011-12-01T21:42:07.000Z

One of his classic lines with an unbelievable delivery.

1. 13 Clips Showing Why Jack Nicholson is the Greatest Actor of All Time

via YouTube: “Jack” has won 3 Oscars (2 Best Actors in a Leading Role & 1 Best Actor in a Supporting Role). He holds the record for the most Oscars and Oscar Nominations of all time with 3 Oscars (tied for 1st) and 12 Oscar Nominations (all-time record). “Jack” also holds the record for the most Golden Globe (Movie) Awards with 6, and he’s been nominated for a Golden Globe 17 times! 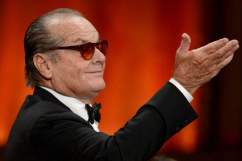 Read More
Celebrities, Jack Nicholson, Movies
"How do you write women so well?" "I think of a man and I take away reason and accountability"