MTV’s former star of The Hills and Laguna Beach, Lauren Conrad, is engaged to boyfriend William Tell. Conrad was so excited she announced it on Twitter to her followers in the below tweet.

Conrad also released a statement on her personal blog, which reads:

I am very excited to share with you guys that William and I got engaged over the weekend. I am beyond thrilled! Get ready for lots more wedding content here on LaurenConrad.com as we begin the planning process.

William and I are overwhelmed by all of your warm wishes. Thank you so much for sharing in this special moment :-)

The couple have been together for about two years and are very much in love. 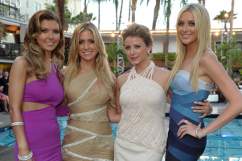