Prince Harry is rumored to be ready to finally wed his girlfriend Cressida Bonas. People reports:

Speculation has increased after The Telegraph reported Sunday that Harry may pop the question to girlfriend Cressida Bonas next year.

In addition, People writes that:

The Telegraph quoted a friend of Bonas’s who said the 24-year-old was “going to marry Harry.” … Harry never stops talking about marriage and children, and she has now got used to the idea. The wedding is likely to take place next year.

Well, it looks like another Royal Wedding may be in the works. 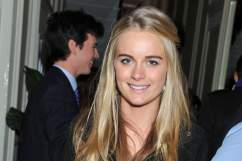