It’s the Season 9 Premiere of the TV show Supernatural and things are crazy right from the start. The show starts off with an awesome recap that brings you up-to-date, all the way to a global meteor shower that is actually fallen angels. Before we know it, Sam (Jared Padalecki) is dying in a hospital and he falls into a coma. With that, Sam’s brother Dean (Jensen Ackles) calls upon a fallen angel to help him save his brother. The fallen angel is Ezekiel (Tahmoh Penikett), who Dean wants to get inside Sam’s head to tell him to keep fighting for his life.

Then, fallen angel Castiel (Misha Collins) begins to adjust to being human. Unfortunately for him, the angels who have fallen from their safe homes in heaven want him dead. Dean tries to warn Castiel, but Castiel only wishes to help the angels. Shortly after, a fallen angel looking for a vessel endangers Sam as he lies in the hospital defenseless. So, Dean and another fallen angel must try to protect him as the hospital becomes under attack.

Dean, didnt Mom ever teach you not to draw on the walls? Bad boy, go to my room! #Supernatural #SPN pic.twitter.com/XCwDKGaIGJ

In the meantime, Castiel trusts the wrong fallen angel who seems so innocent. When he tells her he must leave her, she hits him in the back of the head with a block of wood. She then kidnaps him and is determined to take him to the Grand Canyon where she wishes to possess him, using him as a vessel. But, Castiel causes the car they’re in to crash, ejecting her from the car before having to finish her off. Castiel is forced to kill the fallen angel as she only wishes to harm him and let the other angels know where to find him.

While all of this is going on, Sam is still struggling within himself because he doesn’t want to fight to live. As Sam continues to take steps toward death, he comes face to face with Death in his physical form. But, Dean is determined to save his brother.

Soon, Ezekiel takes over Sam’s body after he pretends to be Dean in order to help try to save him and this is where the episode ends …

Sam sharing his body with an angel & not even knowing…. this isn't gonna end well. #Supernatural

Wow. Just, wow. I am so not sure how Sam is going to take this when he finds out what Dean did to save him. Wow. #Supernatural rocks, again!

And now check out the preview for next week’s episode below: 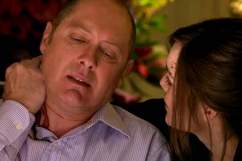