Tonight was the season 4 finale of The Sing-Off on NBC, hosted by Nick Lachey. The three groups who were left consisted of Home Free, Ten and Vocal Rush, but the winner was Home Free . Vocal Rush was the first group to get knocked out of the running.

As far as performances with the judges, Jewel sang with Home Free, Shawn Stockman performed with Ten, and Ben Folds with Vocal Rush. The prizes that the winners take home tonight include $100,000 and a Sony recording contract.

For more info on the champions: 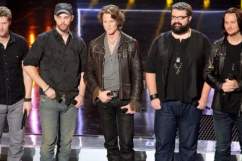