So it’s bouncing around the Internet in a few places — quotes from Miley Cyrus basically saying that Beyonce’s time is over and it’s Miley’s time. Notably, the quotes were published by Perez Hilton, citing a Love Magazine interview.

The full diss was reported as this:

Beyonce has been a big inspiration to me but she’s been out for such a long time. She’s so talented and I think she’s at the top of the game now but people are always looking for new blood and that’s what I bring to the game now, new blood. I got the total package you know, the curves, the rhythm, and the voice. I’m just the best.

But Miley is not happy and is denying ever insulting the lady she calls “B.”

That quote people MADE UP about Beyonce just made me lol! Imagine if I said I got "the looks and the curves I'm just better!" Bahahahhaha

How are people allowed to make up shit & then out quotes around it saying I said that shit! WTF!!?!

Thank god I just woke up from this nightmare.

don't worry. getting 2 the bottom of this shit. making the liar retract the statement. U can cause ALOT of drama but NOT between me & B!

Well, this is a first — Miley shying away from controversy. 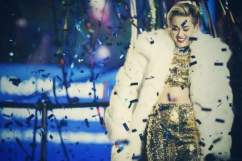