While Juan Pablo pushes his daughter Camila on a swing set, JP says he called up someone who knows a bit about The Bachelor to give him some advice … Sean Lowe. First, Juan Pablo tells Sean that he’s getting a bit anxious. Sean tells JP that it will all hit him when the first limo pulls up to meet the first girl.

JP tells Sean that he’s horrible with names, so he’s worried he won’t remember anyone’s names. Sean tells JP to just be upfront and let them know he’s bad with names. He also tells JP that the girls will do some crazy and weird things, but he should just go along with it. Sean also gives a warning not to kiss any of the girls in front of the others because it creates a lot of problems. But, he does tell JP not to hold back if he wants to kiss someone.

Sean then fast forwards to his fiancee Catherine … his Bachelor love. He talks about his relationship with her and how he knows he loves her, talking about some experience in the middle of the night where his dog got sprayed by a skunk … 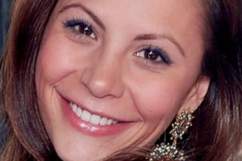