Another Hollywood A-lister is dating a much younger model. Bradley Cooper, 39, had a 22-year-old date to the SAG Awards.

Suki Waterhouse was quite the arm candy for the dapper actor whose movie American Hustle won for Best Ensemble Cast. Here’s what you need to know about the British fashionista who is known for her Sixties mod girl style.

1. The British Model Is on the Cover of Elle UK This Month

Elle asked Suki about her famous boyfriend, but the private bombshell didn’t say much:

I don’t talk about my boyfriend because it’s boring. At least, that’s what I decided to tell you when you asked.

The skinny starlet did confirm in the interview that she met the Hangover actor at the Elle Style Awards in February. The couple first caught the media’s attention as they were photographed leaving the ceremony in the same car.

Whats going on there then Suki Waterhouse getting into a cab with Bradley Cooper she better not be cheating on miles pic.twitter.com/v74dEM1T

During the same interview, she was quick to clarify how they first met:

That didn’t happen there. But we did meet at the Style Awards, I’ll give you that. Look, maybe it’s best for me to say, ‘I’m not one of those girls who goes on about their boyfriends.’ I do think whatever I say will sound weird. But the truth is, if I start talking about him, I probably won’t be able to stop. And I don’t really want to talk about him, you know?

2. The Stars Have Been Accused of a Sham Relationship

Waterhouse is 22, and some people are questioning the relationship.

A reporter, Alexis Rhiannon, at Crushable, found it very suspect that Suki didn’t give Elle any real details on her relationship. Rhiannon wrote:

COULD WE BE ANY MORE JEALOUS OF SUKI WATERHOUSE RIGHT NOW? http://t.co/ln42GgFJmG pic.twitter.com/4qVEUwkxWx

3. When Suki Met Bradley, She Was Dating a Rocker

Causing much gossip, Suki was dating The Rascals’ former frontman Miles Kane when she was spotted with Cooper. When Kane, who now has a solo career, was asked by the Sun what he thought of her new relationship, he said:

The thing is, she is a 21-year-old girl and you forget how young she is. I don’t know how old he is – what, 40 or something like that? She is a young girl and I’m sure he’ll realise that.

The model seems to have a thing for musicians. Another rocker she was linked to was Luke Pritchard of the British band The Kooks.

Suki’s newest relationship is far from dating a rockstar. The couple dressed rather preppy for Wimbledon back in July, when Cooper famously took selfies with Gerard Butler and ignored his girlfriend.
Here are two tweets that show the bromance, while Suki just looks on:

No ones selfies will ever compare to Bradley Cooper's and Gerard Butler's. pic.twitter.com/IWJfK0QfkX

Waterhouse told Vogue that she started her career after being spotted in a London pub. Committed to the craft, she dropped out of high school at 16.

At 19, her first noted campaign was for major-British-retailer Marks & Spencer.
The face of Burberry, Suki does seem to love her job. She told Elle:

I know it’s cool to pretend you don’t care. But I love fashion and I love clothes. I live my life in a sea of clothes. And it’s fantastic to be able to use them and play with them.

During London Men’s Fashion Week this month, Suki modeled Burberry’s Autumn/Winter 2014 Collection. She works for Next Model Management, which represents many big names in music and film. Lana Del Ray and Pharrell Williams are among the international company’s famous clients.

The starlet even blogs! In 2013, she contributed to Vogue, explaining what she wore every day for a month.

5. Her Dad Is a Famous Plastic Surgeon

Her father, Norman Waterhouse, is a leading British plastic surgeon. Suki tells Elle that she observed her father’s work and supports the concept of reconstructive surgery.

I used to go into hospital with my dad and visit the reconstruction patients – and sometimes the cosmetic ones, too. I’ve got nothing against plastic surgery at all. I know lots of people, young and old, who’ve had it. 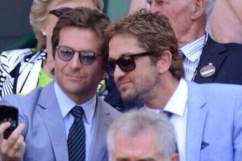 Read More
5 Fast Facts, Bradley Cooper, Celebrities, Models, SAG Awards
Bradley Cooper took his girlfriend, British model Suki Waterhouse, to the SAG Awards. The couple were first spotted in February and have been looking rather cozy ever since. The face of Burberry who began her career at 16, the now 22-year-old is making a name for herself in Hollywood.