The Duck Dynasty boys were involved in another sport besides duck hunting last night. They were featured in the Time Warner commercial during the Super Bowl, alongside Diddy, True Blood couple Stephen Moyer and Anna Paquin, Jon Voight, Liev Schreiber,and Drake.

Willie Robertson, his brother Jase, and their Uncle Si represented the hit reality show in the cameo.

Since the show has been hit with backlash after their patriarch, Phil Robertson, made homophobic comments to GQ in December, some Twitter users expressed their discontent with the cable provider’s choice of spokespeople.

However, the show still has fans who enjoyed seeing the camouflage-sporting Louisianans during the big game.

As if I needed another reason to hate Time Warner Cable. Using the Duck Dynasty guys in their ad—not cool.

Way to go Time Warner, putting the Duck Dynasty cast in a #SuperBowl commercial with P Diddy and Drake. #BlackHistoryMonth

"Nah, keep the Duck Dynasty dude in the commercial. I mean, we're Time Warner Cable, how much more could people hate us?"

Glad to see the Duck Dynasty people in a commercial for Time Warner cable. Two stellar brands in one commercial! 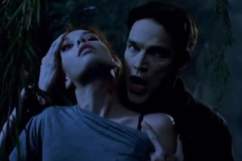