Frank, heading toward the Vice Presidency and having committed multiple murders, has even more to lose. Here are the big plot points, highlights, and shocking spoilers from Episode 2 of Season 2, also known as Chapter 15.

1. Frank is Sworn in as Vice President

Well the king of all ambition has officially what he was striving for all of season 1, to be the Vice President of the United States. The ceremony is held at a quiet private ceremony in Frank’s house because, as Rachel Maddow says in her great cameo, Frank’s not a great pick for the VP spot.

2. Raymond Tusk is Back in Town

Remember the President’s billionaire friend from the midwest? No neither do I, but he’s back. The Warren Buffet-stand in is welcomed back into the show as Frank’s new (but more appropriately-matched) nemeses because a situation is brewing over a meeting with Chinese diplomats that will pit Frank’s interests against Tusk’s profit. The conflict revolves around confronted China on cyber-attacks against the US, or stick to the simple and benign economic issues.

Frank is also, obviously, jealous of Tusk’s influence over the president and he cannot have that.

3. Frank’s Congressional Replacement Gets a Storyline

Frank can’t do anything simply or straightforward, everything must be wrapped in 8 layers of Machiavellian mind games. This applies especially to Jackie Sharp, Frank’s hand-selected replacement for the role of majority whip in the House of Representatives.

Frank turns the race for the Whip position into an all out political battle royale for the amusement of him and his new protege. He chooses two old dogs in the congress and advises they let the Democratic party decide which of the two will be selected. Of course, we know that Frank and Jackie have tricks up their sleeves.

4. Claire Reveals She Was Sexually Assaulted in College

This was kind of a strange plot line to introduce, but I trust the writers to explain why it’s here. At a ceremony to award an army officer, he claims to have dated Claire for “about five seconds” while they both attended Harvard together. It’s revealed that she was forcibly raped by him, so it’s understandable that the interaction between Claire and the general sends her to the bathroom crying where she explains to Frank, “that’s him. The one from freshman year.”

In a post-Edward Snowden world, we should have expected some crypto-terminology and news events to work their way into the House of Cards universe. Lucas, one of our two remaining journalist begins learning about and experimenting with anonymity programs like Tor and the deep web.

The episode introduces it as part of the Chine/Cyber-Attack storyline, but will become valuable tools in Lucas’s investigation in Frank Underwood and his political dealings, especially as he learns to hack phones. 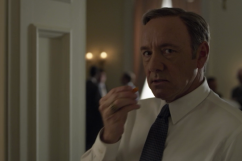 Read More
House of Cards, Netflix, TV
Here are the top highlights and spoilers of the season 2, episode 2 (aka Chapter 15).