1. There’s Foreshadowing to a Threat on Underwood

In a meeting with security agents, there seems to be foreshadowing of a possible threat or terror plot to Frank or the President this season. It’s quickly followed up by an agent telling Doug that someone (the person we know is Lucas) has been making conspiracy-like postings about Frank Underwood on the deep web. Although what he’s doing is not illegal (yet) Doug wants it squashed.

Following along with the theme of cyber wars, both against China and Frank, Lucas finds his computer momentarily hacked. The message window that pops up first displays a picture of Zoe, and then text that says that the anonymous hacker can help.

The hacker tells him to go to a diner where he is delivered an iPad an has a mysterious conversation with a bird avatar. The hackers asks for some pretty ominous things, like Lucas’s finger prints and the server information for the Washington Herald.

Later Lucas goes to the hacker’s apartment where he gets a video of him for “verification.”

3. Jackie Has to Betray Her Friends

Proving she can wheel-and-deal like Frank, his protege Jackie betrays a childhood friend and colleague by leaking information about his illegitimate daughter to the press. Unlike Frank however, Jackie is clearly overcome with remorse when she is confronted by the former-mistress.

Do you think Jackie has the stomach for the shady and unethical dealings Frank has perfected? I suppose only time will tell.

4. The Congresswoman is Getting Inked

This detail may end up to be a little character quirk of Jackie, but in case it turns out to be a major plot device, I thought it should be included. Covered in a hood, the congresswoman continues in the making of a tattoo of flowers and poppies on her side.

She looks like she’s in pretty severe pain while she’s getting it. Could it be some sort of punishment for what she did to her friends?

5. Rachel Strikes Up a New Friendship

Rachel, the exiled call girl, makes a new friend on the bus in the form of a religious music fan. After a stern talking-to from Doug, Rachel attends the Christian music concert she was invited to and continues the friendship against Doug’s wishes. 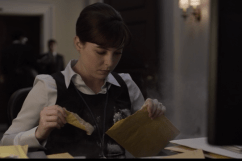 Read More
House of Cards, Netflix, TV
Here are the top highlights and spoilers of the season 2, episode 3 (aka Chapter 16).