Son of God opens in theaters on February 28. It chronicles the life of Jesus from the Nativity through resurrection and revelation. Here’s what you need to know about the religious film that’s being buzzed about in Hollywood.

1. The Man Who Plays Jesus Got #HotJesus to Trend on Twitter

Portuguese actor Diogo Morgado landed the coveted role of Jesus Christ in The Bible miniseries and continues his work with Son of God.

He is responsible for #HotJesus becoming a trend on Twitter, and it’s not hard to see why.

In an interview with the New York Times, the religious actor said that he hopes his appeal doesn’t take away from the film’s message:

It’s a compliment, obviously, but I don’t want that to take away from what we tried to achieve. The best story is the story that gets to the most people. If the message of Jesus was love, hope and compassion, and I can bring that to more people by being a more appealing Jesus, I am happy with that.

2. The Husband & Wife Team Who Created ‘The Bible’ Are Behind the Movie

Reality TV show producer Mark Burnett of Survivor, Shark Tank and The Voice, and his wife, actress Roma Downey of Touched by an Angel, are the creative team behind the film.

They also created the highly successful miniseries The Bible.

The Bible, a 10-hour TV series on the History Channel, was the most-watched program on any cable network last year.

According to the Salt Lake Tribune, the pair knew they wanted to make a Jesus-focused movie even before The Bible became a hit. Burnett said:

We looked at some of the (Jesus footage) that had been edited, and Roma said, ‘This is so good, this should be a film.’

Burnett told The Wrap about his hopes for the project:

This movie is going to be seen by a billion people over the next three or four years, so a big opening would be great, but this is very much a long-term proposition.

3. There’s Talk That it May Surpass ‘Passion of the Christ’ as Highest Grossing Christian Film

Will 'Son of God' Dethrone 'Passion of the Christ' as Top-Grossing Christian Film of All Time? http://t.co/KSWkVN5Csz pic.twitter.com/GB5mRvxGrv

This film comes 10 years after the release of The Passion of the Christ.

That controversial movie was self-financed and distributed by Mel Gibson. On findthebest.com, it’s reported that The Passion made $604 million worldwide.

The Star Tribune recalled that the violent movie became a hit, but was criticized for its portrayal of Jewish people.

According to the Christian Post, Christian leaders, like Joel Osteen, Craig Groeschel, Miles McPherson and T.D. Jakes have already bought out Son of God theaters and distributed about half a million tickets.

According to The Wrap, the film has already made $4 million in group and advance sales.

4. It’s the First Film Since 1965 to Show All the Biblical Moments in Jesus’ Life

According to the Salt Lake Tribune, The Greatest Story Ever Told, released in 1965, did cover Jesus’ life in its entirety.

However, the movies that came more recently, Jesus Christ Superstar, The Last Temptation of Christ, and The Passion of the Christ
were incomplete.

The new movie spends time on the Last Supper and the road to Calvary. It also features the first Christmas, Jesus gathering his 12 Apostles, and important miracles such as feeding the multitudes to walking on water and raising Lazarus from the dead.

5. It Has a Cool Soundtrack That Debuted in the Top 5 on iTunes

Capture the uplifting music in the official #SonofGod soundtrack. Get yours now: http://t.co/5pljIIK0JM pic.twitter.com/Kfn76f1Mkt

The Music Times reported that the soundtrack did extremely well on iTunes after only being released on February 25. 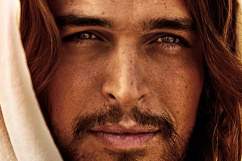