On March 19, figure skating legend Johnny Weir announced on Twitter that he has separated from his husband, Victor Voronov.

It is with great sadness that I announce that my husband and I are no longer together. My heart hurts, and I wish him well.

This comes only two weeks after reports of a dispute between the couple surfaced.

According to Radar, Weir was involved in an domestic violence suit with his husband.

Us Weekly got a statement from Voronov’s manager, Wendy Feldman, on March 20. She said:

Victor is shocked by the abrupt ending of his marriage and is dealing with the trauma endured during the marriage including multiple things that he is only now becoming aware of.

Here’s what you need to know about the soon-to-be ex of the famous skater.

Voronov reportedly filed a police report about a domestic incident in which he claims that Weir bit him.

Just recently, Weir gave a glimpse into possible trouble the couple faced.
He told Access Hollywood about the negative aspects of being married:

Being married is an adjustment and I’m such an OCD, solitary, confined person that it was very hard to open my life and my home and, in some ways, my closet to somebody else.

The athlete continued, speaking about their power struggle:

A marriage between two guys is different than what I imagine a marriage between a man and a woman [to be]. I mean, we’re both constantly trying to fight to wear the pants in the relationship.

2. He Was in the Closet Until a Week Before His Wedding

The engaged Voronov waited until the very last minute to announce his wedding plans.
In fact, Weir dished to Access Hollywood that his husband kept his sexuality a secret until the very end as well.

He said, “My husband was actually in the closet until about a month before we married.”

During an interview with Bethenny Frankel, Voronov confirmed this by saying, “Yeah, I was in the closet. I told my family a month before we got married and then my friends only found out in People magazine.”

He came out to his father first, and said:

I was going to do my dad last because he’s a soviet man, I told him first, he was so supportive, everyone was so supportive so I decided I am going to have fun with this. So I took my best friend to the mall and there was a huge poster of Johnny in makeup and was like, I’m gay and I’m married to that.

3. He Graduated From Georgetown Law

Voronov graduated from the prestigious law school in 2008. According to his Linkedin page, he obtained his undergraduate degree at Emory University, where he was on the Dean’s List.

Weir told People about all the wonderful qualities his husband possessed, including intelligence.

He said, “Victor is the epitome of a gentleman, as handsome as he is clever and loving.”

4. He Married Weir in a Quiet NYC Ceremony

On December 31, 2011, the two tied the night in the Big Apple.
Weir told Access Hollywood about their nuptials:

We were on Worth Street in New York City in a courthouse and once the news broke that we’d gotten married, everyone expected this huge, dramatic [wedding], sort of from the ‘Sex and The City’ movie. But I didn’t want that.

After they got hitched, People reported that Weir talked about where the couple would live:

I look forward to making a home for my family in Bergen County, New Jersey, and introducing my world of glitter and Faberge eggs to Victor.

5. He Was Scared of Sochi

Voronov wasn’t too thrilled that his husband was working at the Olympics as a broadcaster.

In a post for Refinery 29, he opened up about his fears of the tense security situation during the Winter Olympics:

Ultimately, I am scared. Instead of this being a time when we celebrate athleticism, partnership, and truly, the human spirit, I feel anxiety every single day. My friends are there. My husband is there. Innocent people are there. Gays are there. Terrorists are there … I am not a scholar, and my information comes from the news and on-the-ground sources. I hope I am wrong in all my worries, and I hope I will get to follow up this article with one that admits that was the case. 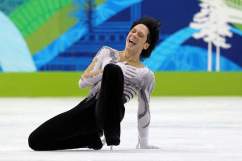