With David Letterman’s announcement that he plans to retire come 2015, many are wondering who will fill the Late Show void. Late Late Show host Craig Ferguson’s name has been on top of that list. Here’s why.

Per the Hollywood Reporter:

Letterman produces the show through his Worldwide Pants production company, which is also behind his time slot companion The Late Late Show With Craig Ferguson. The banner has also produced scripted fare, including CBS’ Everybody Loves Raymond.

2. Craig Ferguson Allegedly Has a Clause in His Contract to Inherit Late Show

According to the New York Times, Ferguson allegedly has a “Prince of Wales” clause in his contract. This means:

[Ferguson’s] previous contracts with CBS have included what amounts to a “Prince of Wales” clause, giving Mr. Ferguson the right to inherit the late-night show in the 11:35 p.m. time period should Mr. Letterman decide to leave. (Those clauses have never been ironclad, however, because a network can choose to pay off the deal rather than complete the succession, as Mr. Letterman learned when Mr. Leno was chosen to succeed Mr. Carson in 1992.)

Because it’s been reported that Jimmy Fallon’s astronomical ratings may have incited Letterman to retire, CBS may be looking for someone fresher than 51-year-old Ferguson.

If this is true, Ferguson will have a huge payday by CBS to get him out of his contract.

4. Jon Stewart and Conan May Have Eyes on CBS Time Slot

Jon Stewart and Conan O’Brien may have had some foresight into Letterman’s retirement, too.

Both late night talk show stars negotiated their contracts to end in 2015.

Per Media Decoder for Jon Stewart:

Comedy Central released a brief statement confirming that Mr. Stewart, who hosts “The Daily Show,” the perennial Emmy-winner and television’s top-rated late-night show, will remain through mid-2015, adding another two years to his contract.

Per New York Times for Conan:

One place where late-night programming is facing no tension or instability is the cable channel TBS, which announced Monday that it had extended the contract of its signature star, Conan O’Brien, until November 2015.

5. Some People Want to See Louis CK Take Over Letterman

Some people on Reddit want to see comedian and star of FX’s Louie take over the Letterman’s show. Louis CK just hosted SNL to rave reviews and as some Redditors say he would bring something new and different to the late night lineup. 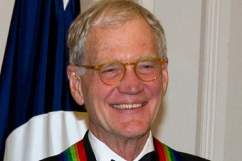 David Letterman to Retire in 2015: 5 Fast Facts You Need to Know