Zoe Saldana made her first-ever public appearance with her husband since their nuptials in September.

The couple was seen acting very affectionate at the AOL NewFronts event held at Duggal Greenhouse in New York City on April 29.

Back in April of 2013, they were first photographed together driving away from Chateau Marmont in West Hollywood. Therefore, it was quite the Hollywood shocker when they tied the knot in a hushed ceremony only four months later.

Here’s all you need to know about Zoe’s creative, long-locked husband.

Zoe and Marco Should Just Make This Their Christmas Card http://t.co/Y2UfusuOKi pic.twitter.com/S3YfLnMmoB

In December of 2013, Perego was photographed pausing from his soccer game to plant a kiss on his new wife, sitting with his parents on the sidelines.

The athlete started playing professionally at age 17, on Venice’s team, but halted his soccer career in 2002 after a leg injury.

The painter and sculptor takes inspiration from artists like Andy Warhol and Caravaggio.
In an interview with the New York Observer, he talked about his first New York show.

Perego definitely likes to push the envelope when it comes to his art.

One shocking piece he created came days after the death of Amy Winehouse to alcohol poisoning.

In a New York gallery, he displayed a macabre sculpture titled, “The Only Good Rockstar is a Dead Rockstar.”
In the interview below, he explained his piece. “I think a rockstar is a human sacrifice of this society,” he said.

3. He Left His Native Italy for New York

“I was living Spanish Harlem without money and I was living on 104 Street,” he said about his first coming to America.

The Italian, whose father is a waiter and mother, a homemaker, took on diverse jobs to make ends meet in the Big Apple.

His work included stints as a busboy, waiter, and soccer coach.

The expat does return to visit Italy. In fact, he has even taken Saldana to his homeland. In May of 2013, the couple was caught kissing on the island of Capri.

4. His Nickname is Private Perego

He earned this moniker because his long locks of blond hair. He is also known to wear a lot of bracelets on his arm.

Adding to his look is a tattoo of his wife on his arm.

The world of the celebrity artist in New York affected him, and he started to lose his hair from stress.

5. He Meditates Every Day

On a mission to improve his life, he looked to Alejandro Junger, a doctor known nationwide for his detox programs.

Completely committed to self improvement, Perego went so far as to live with the doctor for a year, which he said resulted in a complete transformation. 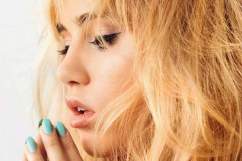 Read More
5 Fast Facts, Bradley Cooper, Celebrities, Zoe Saldana
Zoe Saldana showed off her husband, Marco Perego in their first public appearance since their nuptials. Here's all you need to know about her Italian artist.