Congrats to @Kandi and @Todd167 for getting married!! I cant wait to see the wedding air on @Bravotv!! #KandiTucker pic.twitter.com/huxeoNfvmR

Real Housewives of Atlanta couple Todd Tucker and Kandi Burruss have tied the knot. Take a look at the wedding details, the relationship scoop, and some background on Tucker.

Last night was the best night of my life! Now tonight they are premiering my #BEINGKANDI special on… http://t.co/C4K5KJQDCA

The happy couple made it official on Friday night, April 4, 2014 in Atlanta and Burruss exclusively told In Touch:

This is one of the best days of my life! I never imagined that I would marry my best friend. Todd’s been that to me. And to have just had the wedding of my dreams, it’s all been so beautiful. Now it’s time to party!

2. Of Course Todd Had a Killer Bachelor Party

Todd Tucker had quite the bachelor party, according to the above Twit pic and Phaedra Parks’ husband was there to join in the fun, but Todd wasn’t the only one with a wild night.

Kandi had her own bachelorette fun as well, starting things off with some “Bedroom Kandi” games and then venturing into the ATL for some club action.

Unfortunately, Kandi Burruss’ mother Mama Joyce is not a fan of Todd Tucker’s. Throughout the past season of Real Housewives of Atlanta, we have seen nothing but Mama Joyce trying to stir up trouble between the now newlyweds. Mama Joyce believes Todd to be an opportunist, says she has no respect for him, and even accused him of cheating on Kandi with Kandi’s best friend and assistant Carmon. In addition, Mama Joyce has insulted Kandi’s engagement ring, has turned family members against the couple, and started a physical fight at one of Kandi’s wedding dress fittings. In the above video clip, there’s a sneak peek at Mama Joyce and Todd Tucker’s confrontation from tomorrow night’s episode of Real Housewives of Atlanta.

Regardless of all of this, Mama Joyce was at the couple’s wedding to support her daughter. 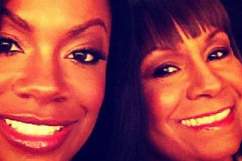 4. The Real Housewives of Atlanta Brought Todd and Kandi Together

Burruss, and Tucker, who is a producer, met while Burruss was filming the fourth season of Real Housewives of Atlanta in 2011. The news of their dating came out on the show’s reunion episode and Burruss was criticized for being a “sugar mama.” Whatever the case, the two seem to be a great couple and we wish them a lifetime of happiness.

Celebrity Net Worth writes about when Tucker and Burruss first got together:

While working on the show, he began a relationship with cast member, Kandi Buruss, which both attempted to keep under the radar so as not to cause problems with the show’s producers. Eventually they decided to announce their involvement with each other, and expected to have to leave the show. Instead of being fired, Mr. Tucker was offered a place in the cast, and subsequently joined another Bravo show as production manager.

Some of the other shows that Tucker worked as a production manager and coordinator on include Run’s House, Oprah, and Heart of the City. According to Wikipedia: He has also worked in the make-up department of films such as The Smurfs (2011), Watchmen (2009), Scary Movie 4 (2006) and Star Trek VI: The Undiscovered Country (1991), as well as for the television series Friends, Wizards of Waverly Place and Hannah Montana.

When Tucker proposed to Burruss on New Year’s Day in January 2013, Us Weekly reported the big news:

Producer Tucker, 40, proposed with a gorgeous two-carat diamond ring designed by Gregg Ruth. The special moment took place in front of her close family and friends at the couple’s Atlanta home, including her RHOA costar Phaedra Parks.

Burruss gushed to the magazine that:

I was totally surprised. I used to make jokes with my friends that I [was] part of the Forever Single Club. That’s what I said before, but now I’m totally different.