On this week’s episode of Billy on the Street, comedian Billy Eichner grabs Paul Rudd’s hand and takes him on a journey through the streets of New York City to see who would sleep with him. 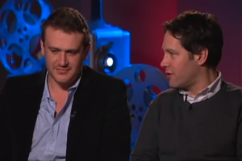