New Zealand pop superstar Lorde has tweeted that she is “scared” of photographer Simon Runting. She took to social media to tell her millions of followers that Runting has been stalking her.

1. Lorde Said Runting’s Behavior ‘Should Not Be An Accepted Standard’

i understand that this comes with the territory. i do not understand why I should be complacent.

The singer, the first Kiwi to have a Number 1 hit in the U.S., tweeted a pic of Runting and said that he “frequents central akl (Auckland).” She added, “this should not be an accepted standard for young women or anyone in this industry. i understand this comes with the territory. i do not understand why i should be complacent.” It’s not clear what exactly promoted Lorde to speak out.

2. Rihanna Ranted Against Runting in October

his name is simon runting. he took these photos of rihanna at her hotel last year. pic.twitter.com/witARDCHym

Lorde continued her campaign against Runting by posting a link to his Facebook page. Later she tweeted pics that he had taken of Rihanna during her tour of New Zealand. Rihanna herself railed against Runting back in October 2013, when she posted the pics on her Instagram writing, “I hate these n***** more than Nazis.”

3. At Least 1 of Runting’s Photos is Famous For a Good Reason

@BearSilvershade YW. posted this one by Simon Runting / Rex Features in case you missed it. Still my Fav. pic.twitter.com/gZR7zML9

One of the most famous photos that Runting snapped was the “Super Image of Cosmic Event” in May 2012. The image was of the moon at its closest point to the earth. The photo was used internationally by publications such as The Guardian.

Some paparazzi are absolutely disgusting and will do anything for a story. Please get the word out about Simon Runting. #StopSimonRunting

A New Zealand blog, Whale Oil, refers to Runting by his nickname, “porkchop.” The blog also takes aim at his style, calling him “the world’s least discreet paparazzi photographer.” The blog also tells its readers:

Models look out at Fashion Week, imagine Runting coming at you in the changing room?

5. Runting’s Name is Synonymous With Privacy Law in New Zealand

Runting was the defendant in one of the most famous privacy cases in New Zealand history, Hosking v Runting. The case, which centered around Runting’s taking of pictures of the infant twins of New Zealand TV presenter Michael Hosking, found that publishing the photos was legal but the Hosking family may be able to sue Runting (and other paparazzo) for damages. The case is considered a privacy law landmark in New Zealand. 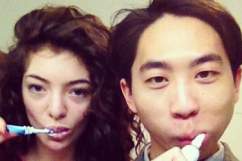