Tonight is the 2014 Met Gala and there will be a lot of changes going on for the big event. Read on to hear about tonight’s theme, the celebrity guest list, who’s wearing who, and all the details you need.

1. There Will be No Live Stream This Year

It’s been reported that there will be no live stream this year for the high-fashion red carpet arrivals at the Met Gala. Bustle.com gives us the run-down on why:

In the past, the event has been livestreamed for the viewing pleasure of those of us who can only dream of being in attendance. However, The Met announced via Twitter on May 5th that no livestream would be available at this year’s event. One has to wonder if this is a consequence of Anna Wintour’s desire to increase the exclusivity of the already exclusive party.

Some have said that a live stream will be provided on Vogue.com, but we have not seen any signs of this happening. Though there will not be a live stream, we will be sure to post the best photos from the event tonight and The Met will be live tweeting from 6:00 p.m. until 8:30 p.m.

2. The Theme White Tie and Diamonds

Every year, the Met Gala follows a theme and this year’s theme is “White Tie and Diamonds.” Celebrities and fashion elite wear the top designers and always make a point to follow the theme. A big trend that’s expected for this year’s red carpet is the “man brooch.” The Observer writes:

For this evening’s Met Gala, men’s accessories are expected to make a bigger splash than ever. In particular, the man brooch may emerge as, if not the next Big Thing, then A Thing … This year, the Met Gala dress code for men has tightened up and the invitation requires white tie.

This year, apparently not all the designers are happy about the theme of The Met Gala, particularly Marc Jacobs. The Huffington Post reports:

Marc Jacobs is decidedly unhappy about it, telling Vogue UK it is “much more straightforward,” and “not as exciting as wearing a lace dress and boxer shorts,” something the designer wore to the gala in 2012 for the Schiaparelli and Prada: Impossible Conversations theme.

Wintour has had the desire to crack down on the exclusivity of The Met Gala and one of the ways to do this was to cut the guest list. In addition, the ticket costs have gone up as well. Bustle.com posted that the Hollywood Reporter previously wrote:

For the official opening of the newly renovated and renamed Anna Wintour Costume Center (to which Lizzie andJonathan Tisch donated a cool $10 million), a source tells THR, ”Anna wants more exclusivity and high fashion” – though one-half of April’s cover, Kim Kardashian, is still on the invitation list – and raised ticket prices from $15,000 to $25,000 per person.

As far as what celebrities will be wearing which designers, Perez Hilton published the list and we’ve posted it below:

4. The Gala Celebrates the Opening of Exhibit “Charles James: Beyond Fashion”

Tonight on the #MetGala red carpet, we look for the influence of #CharlesJames’s resplendent glamour. pic.twitter.com/XyWeqT2Po8

Charles James is the designer to be honored at this year’s Met Gala. E! Online made the note that much of the general public is unfamiliar with James’ work.

The late designer is not exactly a household name, and he’s mostly recognized among the fashion set. But just because he may not be as familiar a name as, say, Coco Chanel, that doesn’t mean that he wasn’t tremendously influential.

Below you can view a behind-the-scenes video of the Charles James exhibit.

5. It’s the Opening of the New Anna Wintour’s Costume Center

The Costume Institute has gone under a big renovation and was renamed Anna Wintour’s Costume Center. Today was the big unveiling in honor of tonight’s Met Gala and Michelle Obama cut the ribbon at the opening. Though the first lady was at the ribbon-cutting ceremony, Page Six has said that she will not be attending The Met Gala for security reasons.

According to Page Six, Michelle Obama’s attendance ”would require huge extra security and screening at the party, which could inconvenience others.” Although it would be quite entertaining to see those big, designer gowns have to go through metal detectors.

“The new Anna Wintour Costume Center is designed to accommodate and inspire the next generation.” —Director Thomas P. Campbell #CharlesJames 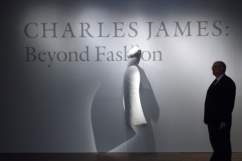